Hopes to hear from the Tigers come Sept. 1

A versatile, multi-talented Sunshine State prospect hit the road this summer to visit a lot of schools, including Clemson.

Miami (Fla.) Florida Christian School 2023 cornerback Antonio Robinson traveled to campus in June to compete at the Dabo Swinney Camp. The four-star recruit made his way up to Clemson as a part of 17 visits all across the country.

“The experience was amazing,” Robinson told The Clemson Insider recently, reflecting on his visit. “The facilities was nice, especially the therapy room. And then Coach Reed, I had a great time with him. He took me around the school and I had a great experience talking with him. He’s a great DB coach too.”

What type of feedback did Robinson get from Clemson’s cornerbacks coach?

“He said that I’m very elusive and that I’m a very smart player,” Robinson added. “That I can play anywhere on the field. He would love to have me at Clemson.”

And Robinson can play anywhere on the field.

For Florida Christian School, Robinson plays cornerback, safety, sometimes he can play a little bit of linebacker, then on the offensive side of the ball, he plays quarterback and wide receiver.

Robinson said that he wants to play outside cornerback at the next level.

His junior season is already underway, as his team is currently 2-0.

Robinson has three catches for 100 yards with a receiving touchdown. Additionally, he has seven tackles, two tackles for loss and a fumble recovery. Then at quarterback, he has a 45-yard rushing touchdown.

Robinson hasn’t heard from Clemson lately as they told him back on his visit to wait until Sept 1. He told TCI that he expects to hear from the Tigers come Wednesday.

While he doesn’t have an offer from Clemson just yet, the Tigers hold a lot of interest for Robinson.

Getting recruited by a program as prestigious as Clemson means a lot to him. 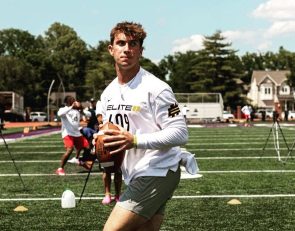