What They Are Saying: Clemson targets and commits show out in Week 3

What They Are Saying: Clemson targets and commits show out in Week 3

A number of Clemson’s commitments and recruiting targets in the Class of 2022 took the field on Friday night and shined under the bright lights.

Check out what Twitter had to say about them:

Hays defeats Wichita East 35-6 behind a big night from Clemson commit Jaren Kanak: 248 rushing yards, 162 passing yards and 76 punt return yards. Hays defense was lights out, holding a Blue Aces offense that averaged 40+ points a game in 2020 to under a TD. #sportsinkansas

Hays High Kanak to Dale 98 yds for the score: pic.twitter.com/EdoEE9I3hA

Klubnik with a dime and the Chaps are on the board. pic.twitter.com/nTcyIcJIMX

Klubnik finds a guy over the middle but no dice on third down from the +10.

Chaps settle for three on the following play to add to their lead. #txhsfb | @dctf + @GameOnSportsPro pic.twitter.com/aItGvHbB7j

Westlake QB Cade Klubnik (@CadeKlubnikQB) takes it himself to give the Chaps a 20-0 lead over Euless Trinity in the 2nd quarter.#TXHSFB | @HornSports pic.twitter.com/Yk0LnzA139

Greenville strikes first vs. rival Mauldin as ⁦@PrometheusFran1⁩
throws back to Tyler Brown & the wide out quickly goes deep to Josh Sapp for a 40-yard touchdown,
⁦@GHS_Raiders⁩ up 7-0.
⁦@WSPA7⁩ pic.twitter.com/s30uFXHPgG

Trevor Etienne scores on the opening kick return. Dogs went for two and got it. 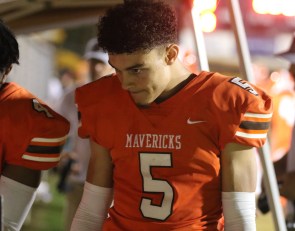