In Week 1, No. 4 Ohio State played in a 45-31 shootout against Minnesota. Second-ranked Oklahoma needed 40 points to beat Tulane and UCLA and No. 16 LSU combined to scored 65 points in the Rose Bowl.

However, in Charlotte Saturday night, No. 5 Georgia beat third-ranked Clemson, 10-3, in a game that seemed more like one of their defensive battles from the 1980s than a game being played in 2021. Besides the 13 combined points allowed, the Bulldogs and Tigers combined to allow just 436 total yards.

To put it into even better perspective, Georgia averaged just 4.2 yards per play, while Clemson averaged 3.0. That is per play.

Though he did not like losing the game, obviously, Clemson linebacker James Skalski said he had a lot of fun playing in a game in which both defenses dominated the lines of scrimmage.

It was also refreshing.

In an era when offenses are scoring 40 or 50 points per night, Clemson and Georgia played a good old fashion slugfest. 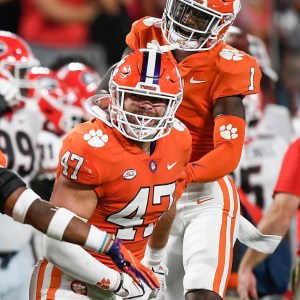 “At halftime, I was like this is my kind of game right here. We did not give up a touchdown,” Skalski said Monday from the Poe Indoor Practice Facility in Clemson. “That is awesome. That was just an old school classic matchup right there. I bet a majority of the country was like, ‘What a boring game.’ But if you love football and you understand football and defense, especially, you really appreciated that one. That was a hell of a football game between both sides. I enjoyed every second of it.”

For the Tigers, last Saturday’s performance was a far cry from what America saw last January when Ohio State was running up and down the field in the Sugar Bowl and making big play after big play on the Clemson defense.

The Tigers allowed just 256 total yards to a Georgia offense that started four of its 10 possessions from the Clemson 49, its own 37, own 35 and the Clemson 45. None of those drives resulted in points for the Bulldogs.

“I think we were just happy we played Clemson football, again, Saturday night,” Skalski said. “We were mean, physical and got nasty in the trenches. That is how we like it.”

Clemson defensive coordinator Brent Venables said Georgia completed 21 passes that were eight yards or less, and it was 2-for-10 on attempts longer than nine yards.

Keep in mind, the Tigers did all of this despite missing two starters in Tyler Davis on the defensive line and Nolan Turner on the back end. Ruke Orhorhoro got the start in the place of Davis at defensive tackle, while Andrew Mukuba started at strong safety for Turner.

“As a defensive guy, it was good (to play in this game). I felt like the whole defense played sound. We played disciplined. We showed a lot,” Mukuba said. “There were a lot of people who judged us off of that last game against Ohio State. But I feel like we came in and did a lot of positive stuff. There is always room for improvement, but I feel like we did well.”

And more than anything, it was fun to be a part of a game where defensive football shined the most.

And it was fun to watch.