For starters the sixth-ranked Tigers returned to the win column as they pounced on South Carolina State early and ran away with a 49-3 victory.

And Clemson defensive coordinator Brent Venables had plenty to celebrate after his unit kept their opponent out of the end zone for a second straight week. But after the game his most impassioned answer was about the Tiger faithful in the stands.

“The stadium was awesome. The fans, just driving onto the campus gives me chills just thinking about it,” Venables said. “It’s so cool to see the passion, the love and the pride that Clemson and its constituents have for their university. The alumni are special here and that was so cool.”

After a full season with a 25-percent capacity crowd at Memorial Stadium in the wake of the pandemic, Death Valley welcomed 78,609 fans into its gates to watch the Tigers play.

Before kickoff, as Clemson loaded onto busses and traveled from the west end zone to the top of the hill, Venables paused to soak in the scene of a raucous crowd eagerly awaiting their team to rub Howard’s Rock, run down the hill and step on the playing surface.

“Our guys came out of the bus to get ready and run down the hill and the crowd was going nuts man,” Venables said. “I had to pull the headset off and take it all in because I don’t want to take that for granted.”

Last season R.J. Mickens experienced his first taste of Death Valley. But in his assessment, nothing compared to standing at the top of the hill on Saturday.

“It was like something out of a movie, I saw it on the recruiting trips and saw it on TV but I never really got that full experience especially at home,” the sophomore safety said. “In Charlotte it was a love-hate environment, and it was still crazy to see that but playing in Death Valley is special.”

Venables made sure to credit the Clemson alumni, students and fans for the appreciation they show the Tigers every time they play at Memorial Stadium.

“The people at Clemson have so much pride and appreciation for its university, the players, this program, this history here and its very very special and was on full display today,” he said. 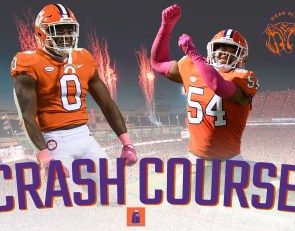