GREENVILLE, S.C. — The Clemson Insider was able to cross off not one, but two names from this season’s first edition of the Tour of Champions.

Up first was Josh Sapp. Next? Sapp’s teammate, Collin Sadler.

Sadler, a four-star offensive lineman from Greenville High School, is already pretty confident in his decision to commit to Clemson.

“It was honestly the best decision I’ve ever made,” Sadler told TCI following Greenville’s 32-2 victory over J.L. Main last Friday night. “I pulled the trigger early because I knew it was the right thing for me. It’s just been really good seeing everything settle down and being able to enjoy my senior year without traveling around and all that.”

If there’s one thing that Sadler made inherently clear during his conversation with TCI is that he is very happy with his decision.

Dating back to his recruitment process, Clemson treated the local product like they do everyone else. They waited until his junior season to offer and it was one of the latest ones he received.

“I visited there. It was completely what I heard from everyone around me for years,” he said. “I didn’t grow up a Clemson fan. I’d never been to a game. The first time I was ever on campus was to watch spring practice. I could just tell that everything they preached, right from the get-go, was true.”

Sadler was a part of that group that was among the first four 2022 commits. He’s one of the leaders of Clemson’s 2022 class and he’s been adamant on social media that his class is the best the nation has to offer, despite what recruiting rankings say.

Sadler has a close relationship with Mason Johnstone, a three-star offensive lineman from Greenville’s Christ Church Episcopal School. Johnstone joined Clemson’s 2022 class as a PWO commit back on June 13.

“Masom Johnstone, he’s from Clemson,” he said. “I’ve known him for probably about a year now. He started training with the same O-line trainer that I train with. He’s a great guy.”

Being that he’s not too far from The Valley, Sadler is planning to go to as many Clemson home games as he can. While he couldn’t make it to the Tigers home opener against South Carolina State, he’ll be back in Tiger Town as Clemson opens up conference play against Georgia Tech this Saturday.

Clemson already feels like family for Sadler and a lot of that has to do with the coaching staff.

“It’s a great relationship,” Sadler said when asked about his connections with Clemson offensive line coach Robbie Caldwell and offensive analyst Thomas Austin. “I’ve been able to know Coach Caldwell a little bit longer than I’ve known Coach Austin, but the more I talk to Coach Austin, the more I love him and the more I see Coach Caldwell in him. I’m going in with great expectations for the people there and the development there.”

According to Sadler, Caldwell will communicate with him about once every day and he’ll call him about once a week. He wants to give Sadler the space to enjoy his senior year as much as he can.

Sadler has the positional flexibility to play all across the line. He plays left tackle for Greenville, but he’s not coming into Clemson with the expectation to play any position

“One of the things that Coach Caldwell really likes about me was versatility,” he said. “He believes that I’m flexible enough to play center, strong enough for guard and athletic enough for tackle. As long as I’m on the field, I’m happy.”

What can Clemson fans expect out of Sadler and what does he bring to the table? 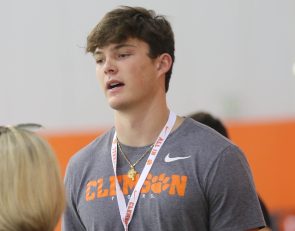 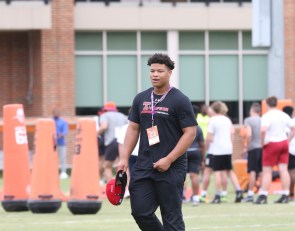 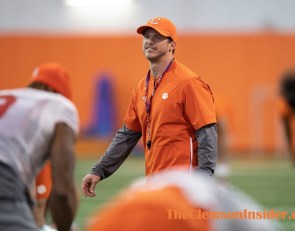