A four-star wide receiver and top-100 national prospect who hails from the Tar Heel State could be closing in on a coveted offer from the Clemson Tigers, based on what he has heard from wide receivers coach Tyler Grisham.

Grisham recently traveled to see class of 2023 wideout Christian Hamilton play in one of his games with Hickory Ridge High School (Harrisburg, N.C.), and the two have been staying in regular contact.

“What I’ve been hearing from Coach Grisham is that he thinks I’m an amazing player,” Hamilton told The Clemson Insider. “He says just be patient with him because he doesn’t just throw out offers. He says (Clemson is) really, really close to offering me and also he wants me to keep in touch with him weekly.” 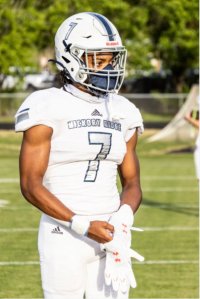 “He came to one of my games a couple weeks ago,” Hamilton said. “He said that I showed him a lot, I played awesome.”

Hamilton will soon return the favor of Grisham’s visit to see him, with a visit to Clemson. He is set to attend the Tigers’ game against Boston College at Death Valley this Saturday.

“I haven’t visited any schools so far yet (this season),” Hamilton said, “but Clemson will be my first, their home game Oct. 2.”

Hamilton also visited Clemson this past June and hit the road to check out a slew of other schools over the summer as well, including Louisville, Texas A&M, South Carolina, Ohio State, Virginia Tech, Tennessee, North Carolina, Georgia and Penn State.

All of those programs have offered Hamilton, with the exception of Ohio State and Clemson.

As for when Hamilton will make his college decision, he is eyeing a few potential dates.