After two uncharacteristic losses in September, Clemson has already fallen out of favor and out of the top-10 in the AP Poll.

That’s caused some in the national media to speculate whether this is the beginning of the end for Dabo Swinney and Co.

Paul Finebaum was asked the same question that was posed to both Heather Dinich and Robert Griffin III on ESPN’s Get Up! show Wednesday morning:“Are Clemson’s days as a national powerhouse, have we seen that come to an end?”

Finebaum, of course, gave a pointed answer that won’t surprise anyone.

“Dabo’s dynasty is done,” Finebaum said. “I don’t like anything I see there. I respect what Heather has just gone through saying, but I strongly and vehemently disagree. They lost one coach (Jeff Scott) a couple of years ago to USF. I think that was a big loss. This is a staff that has always been together, but I think it’s getting stale.

“Yes, recruiting is still good, but will it be elite after what we just got through watching? This doesn’t look like Clemson is part of the cool kids anymore and I think they’re gonna pay for it in recruiting. They play in a terrible league, which will hurt them even more.” 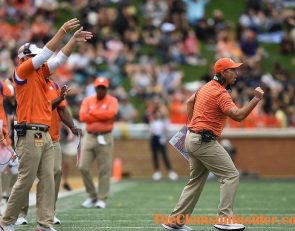 Swinney passes along some good news