There are ton of things former Clemson tight end K.D. Dunn can remember about the Tigers’ magical run to the 1981 National Championship. But what he remembers the most was “Victory Meal Monday.”

“Our training table was something else. It was out of this world,” he said. “On Mondays, was the victory meals. We had it all. We had steak, lobster, champagne … we had it all. And my gosh! I miss that now.”

Clemson had plenty of Victory Meal Mondays in 1981, as the Tigers went on an unprecedented run in Clemson history. They beat No. 4 Georgia, No. 8 North Carolina, and No. 4 Nebraska on their way to winning the school’s first national championship in any sport.

“We were the first,” quarterback Homer Jordan said with a smile.

Clemson has since won two more national championships in football. The 2016 Tigers did it with a 14-1 mark and then in 2018, those Tigers became the first team in the modern era of college football to go 15-0.

But the 1981 team set the standard at Clemson, and it is the standard all Clemson teams have tried to live up to. The 1981 Clemson Tigers will be honored on Saturday when the 19th-ranked Tigers take on Boston College, as a part of Homecoming Weekend in Clemson.

“It was a magical year for us in 1981,” Dunn said. “Nobody thought that Clemson would win the national title, and not a lot of people knew where Clemson was at the time.”

Ninety players from the 1981 team are expected to participate in Tiger Walk on Saturday. They will then be honored at the end of the first quarter on the field at Memorial Stadium.

“We had a good team that year, and it came together for us,” said Jordan, who was an All-ACC First-Team Quarterback in 1981. “We took a lot of pride in playing for our teammates. Coach [Danny] Ford preached about playing for your teammates and playing for your family and go have a good time. So, that is what we did.”

Since 1962, Clemson’s 1981 team is just one of three teams to claim an Associated Press National Championship after opening the season unranked.

In 1980, the Tigers closed the year with four defeats in their last six games. They needed a 27-6 victory over rival South Carolina to salvage a winning season.

However, beating the Gamecocks that year was not just like any other year. USC was 8-2 and ranked No. 14 in the country and was led by eventual Heisman Trophy winner George Rogers.

The win over the Gamecocks was the shot of confidence the Clemson program needed to get back on track. In the off-season, the momentum of the victory carried over, as players used it to drive them in the spring and summer.

And though the South Carolina game gave them confidence, it was the Tigers’ stunning 13-3 victory over defending national champion Georgia that told them they were capable of beating anyone in college football. Jordan threw a touchdown pass to All-American Perry Tuttle and the defense forced a record nine turnovers that sunny afternoon in Death Valley.

It especially helped Jordan, who admitted his confidence shot way up after beating his hometown team.

“We started rolling pretty good then,” he said.

Clemson allowed just three teams to score more than 10 points in 1981—Wake Forest, South Carolina and Nebraska—and it went 18 quarters without giving up a touchdown during one stretch.

“We didn’t want people to score on us, and we wanted to physically dominate people,” All-American linebacker Jeff Davis said. “In a sick way, that was our joy. Yeah, we may not have beaten everybody by 21 points, but your body and your mental state of mind said we beat you by 21 points. That’s the kind of football we played. We had no reason for how great we were playing.”

“That was pretty tough game. Two good programs going head-to-head,” Dunn said. “They had great athletes over there, along with ours. It tells you the testament of good players going at it because it came down to the end.”

It ended with Jeff Bryant falling on a backwards pass to seal the Tigers’ 10-8 victory.

Clemson closed out its first perfect regular season since 1948 by beating Maryland (21-7) and South Carolina (29-13). After the South Carolina game, they accept a bid to play No. 4 Nebraska in the Orange Bowl.

The Tigers moved into the No. 1 spot for the first time in the program’s history a week after they concluded the regular season. Penn State beat Dan Marino and previously undefeated and No. 1 Pittsburgh, propelling Clemson to No. 1 in the rankings as it headed to play Nebraska in the Orange Bowl on New Year’s Day.

At the time, the 1982 Orange Bowl was Clemson’s first Orange Bowl appearance in 25 years. Jordan, the game’s Most Valuable Offensive Player, completed 11-of-22 passes and had 180 yards of total offense in leading the Tigers, while Davis, the Defensive MVP of the game, had 14 tackles in the 22-15 victory.

“We earned that thing,” Davis said. “Not in a sense that we beat everybody or were more talented. We earned that thing on the practice field. That’s where we won our national championship. We didn’t win the national championship in the Orange Bowl in Miami. We won that thing on those practice fields. Coach Ford worked us. If I could say anything that could define us, I would say that was it. We knew how to work. When you know how to work, there is no give up and there is no satisfaction when you know how to work.”

These days, when the 1981 team gets together, they do not talk much about the games or their perfect 12-0 season. They instead just enjoy each other’s company, as they laugh and joke around. They know what they accomplished 40 years ago was special. That is all they need, and maybe another victory meal on Monday. 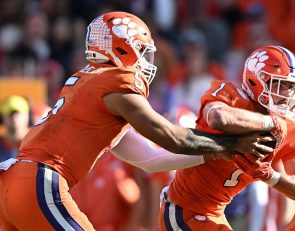