This is what Clemson's defense does

This is what Clemson's defense does

Since 2013, the Tigers have made 17 game-winning stops in the last few minutes

Once again, when it mattered the most, Clemson’s defense came through for the 19th-ranked Tigers in their 19-13 victory over Boston College Saturday night at Death Valley.

With 53 seconds left to play, the Eagles faced a second-and-10 from the Clemson 11-yard line. Trying to see what Clemson was doing in the secondary, quarterback Dennis Grosel took his eye off the ball, as he received the shotgun snap, and fumbled the football.

An alert K.J. Henry, who was rushing up the field, jumped on the loose ball at the 22-yard line, sealing the Tigers’ dramatic win. It marked the second time this season, the defense had to hold off an opponent late in the game to seal a victory. It was the 17th time it occurred since Brent Venables became Clemson’s defensive coordinator back in 2012.

The Tigers (3-2, 2-1 ACC) have had at least one game in each of the last nine seasons in which the defense made a stop in the final minute to seal a victory. Clemson used a goal-line stand in the final minutes to knock off Georgia Tech on Sept. 18.

“We have been there a lot,” Venables said after Saturday’s game. “In ten years, it piles up when you have those opportunities and then every year you have a different DNA. I am trying to play to their strengths (as a play caller), protect their weaknesses and in some of it you are not anticipating playing as much with our dime stuff.

“We had to kinda adjust within the game.”

Clemson’s defense allowed just one touchdown, a 3-yard Patrick Garwo run with 14:05 to go in the third quarter.

But despite all of that, the Eagles still found themselves with the football at their own 36 and a chance to go win the game with 1:48 to play. 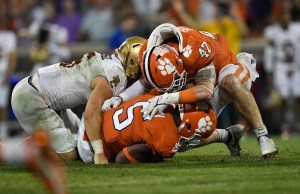 Henry’s fumble recovery to seal the win was not the only time the Tigers turned BC away in the final minutes. Andrew Booth, who had eight tackles, stopped wide receiver Zay Flowers a yard short of the first-down marker on a fourth-and-nine play at the Clemson 22 with 2:14 to play.

Grosel opened the Eagles final drive with a 15-yard pass to Flowers and then a 7-yard completion to Travis Levy. He then found Flowers for 14 and Levy for four, before connecting with tight end Trae Barry for 13 yards, moving the ball to the Clemson 11.

After linebacker James Skalski broke up another pass to Barry on first down, Henry recovered Grosel’s fumble to secure the win.

“They were tempoing us. Everything was going fast,” Henry said. “We were just trying to give ourselves a chance, so line up and get off the ball… They had a backup left tackle in that did not seem comfortable over there, so we were really trying to get off the ball and get to the quarterback as fast as possible.

“At the end of the day, God put us in the right place at the right time and we were just blessed right there.”

The stop marked the second year in a row the Tigers held off BC in the final minutes. It just added to all the dramatic victories Clemson has had over the years, like Deshawn Williams knocking down a Louisville pass in the final seconds back in 2014. The two-point stop against Notre Dame in 2015, the Louisville receiver who went out of bounds a yard short in 2016 and Skalski’s and Xavier Thomas’ two-point stop in Chapel Hill in 2019 just to mention a few.

Then of course there was Skalski sniffing out the shovel pass on fourth-and-goal to save the Georgia Tech game.

“We just take it one play at a time. It is that windshield mentality all the time around here,” Henry said. “I think that is what we did a great job doing. Whenever there is a mess up, we never point fingers. We are just ready to go to the sideline and get it fixed and then go out there fix it and compete.

“That is what these guys do night in and night out.”