Swinney 'very encouraged' by offensive line play in win over BC

Swinney 'very encouraged' by offensive line play in win over BC

Clemson’s offensive line has been a work in progress, to say the least.

The unit had largely struggled coming into Saturday’s game against Boston College and turned in their best performance of the season during Clemson’s 19-13 victory.

“We really played well up front,” Dabo Swinney told reporters Monday. “I can’t tell you how proud I was of those guys.”

Leading into this past Saturday’s game, Swinney indicated that Clemson was considering everything in terms of reshuffling things upfront. Instead of pulling a starter from the lineup due to poor play, Will Putnam did not suit up due to a toe injury.

While everyone graded out quite well, Clemson will likely have another different starting combination upfront against Syracuse. Swinney described Putnam as “a little better” and that he’s hopeful that by Sunday, he’ll be able to start practicing again.

While it came at the expense of an unfortunate injury, Clemson’s decision to make a change at center and move Bockhorst back to his natural position of guard, paid off immensely.

“Rayburn man, I was super proud of him,” Swinney said. “He did have that one little series down in the red zone, critical. We had the pick play, that was just a bad play by E.J. (Williams) and then we jumped offsides, and then we had the bad snap. It was like bam, bam, bam, right there in a row. But man, Rayburn played really well. I was super, super proud of him. He had a couple of plays where he got on the edge a little bit, but he was physical. The first time for him to go in there and play that amount of snaps and manage it.”

“Rayburn really did a nice job, really pleased with him,” he added. “I think that’ll be huge for his confidence to have that amount of experience.”

Bockhorst came into the season as Clemson’s most experienced offensive lineman, but the team’s vocal leader’s move to the center position has been inconsistent at best. He turned in his best performance of the season against Boston College.

“Bockhorst was our player of the game,” Swinney said. ‘He was just outstanding. He and Kobe (Pace). Bock was tremendous, by far his best game. (He was) physical, and did a great job of helping Rayburn.”

Overall, Swinney was impressed with what the entire unit was able to do up front all game. Clemson was finally able to run the ball efficiently and effectively. The Tigers gained 231 rushing yards on 40 carries, while D.J. Uiagalelei had ample time in the pocket.

“The whole group really played well. There was a lot of things on tape that was really good to see, that I’m very encouraged by,” Swinney added.  “Marcus Tate looked like he took a step forward as well. The game slowed down just a little bit for him. (Jordan) McFadden has been solid as they come all year. The same thing with Walker (Parks), I thought he did a heck of a job for us too.” 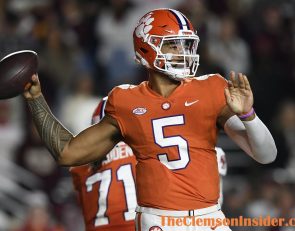 Tigers talk Uiagalelei's response to criticism: 'We wouldn't be here without D.J.'