The lowdown on Syracuse from an Orange beat writer

The lowdown on Syracuse from an Orange beat writer

TCI recently spoke with Chris Carlson to get some insight on Syracuse ahead of Clemson’s game against the Orange. Carlson covers Syracuse football as a beat writer for The Post-Standard and Syracuse.com.

Carlson hit on a number of topics during the following question-and-answer session, including the switch Syracuse has made at quarterback, the Orange’s running game, some of the alterations at the Carrier Dome and more heading into Friday’s game.

Note: This interview was edited and condensed for clarity

Syracuse is .500 on the season, but the Orange are a handful of plays against Florida State and Wake Forest from being 5-1. What’s made them so much more competitive this season?

I think the big thing is just their offensive line is actually healthy. They started the year last year with zero depth because of some injuries and had shift their fullback to offensive guard, so that’s just a horrible place to start offensively. So they have an offensive line, and they have a running game this year. And they’ve really shown improvement the last three games as they benched their previous starter, Tommy DeVito, and gone with Garrett Shrader at quarterback. He’s much more of a running quarterback than a throwing quarterback. Their receives aren’t great playmakers, so that didn’t jive well with the previous quarterback. And now they’ve shifted into a team that has two running threats and then tries to pass just enough to get by.

Speaking of running threats, running back Sean Tucker is the ACC’s leading rusher to this point. Is that a product of having adequate blocking in front of him? Or is it more his skill set?

It’s a combination of both. He’s very good and very good at making the first guy miss. He’s very good at falling forward and picking up that extra 1 or 2 yards on every run that makes a 2-yard run a 3-yard run or a 3-yard run a 4-yard run. It usually takes multiple guys to corral him, but the fact that he has some room to get started and he’s not swarmed by three guys right off the bat is a product of having a competent offensive line this year.

You mentioned Garrett Shrader, who began his career at Mississippi State. What has his journey been like to taking over as Syracuse’s starting quarterback?

He was recruited to Mississippi State under (former MSU coach) Joe Moorhead initially as a quarterback. And when (current MSU coach Mike) Leach got there, they run the air raid. And the fact that he is a running quarterback doesn’t do a whole lot in Leach’s system, and that’s what he does best. So they tried him at wide receiver. He’s a good athlete, but he fancies himself as a quarterback. So he transferred to Syracuse. Tommy DeVito had not really established himself as an ACC quality starter, so Shrader saw the opportunity here to compete for playing time right off the bat. And the offense really sputtered under Tommy DeVito early. They tried to let him win the job as a veteran, and the offense just couldn’t get going to the point that they had to give Shrader opportunities. And the offense has just looked and functioned better with him in there. He’s still not a great thrower, so you can see why Leach didn’t want him as his quarterback at Mississippi State. I don’t think he’s completed a deep ball yet that we’ve seen, but he’s a good runner. And he’s thrown some of the short stuff good enough. It’s a better fit for Syracuse right now.

Do most of Shrader’s rushing yards come on designed runs? Or is it more a case of him using his athleticism to scramble on passing plays?

It’s split. I think every game he’s gotten a lot of playing time, he’s run the ball at least 16 times. That’s a product of the (run-pass option) game with him and Tucker. And Tucker gets a lot of attention, so he’s pulling it a lot and running it. That said, he carried 29 times against Wake Forest, which is the most a Syracuse quarterback has run the ball in more than two decades. That was a product of how Wake defended. They played a lot of two-deep (coverage) and took away the pass, and if he doesn’t have to pass, he’s more than happy to run it. So they’re going to run a lot of designed runs for him, but if he gets up to that 20-plus number, it’s probably because of how Clemson has chosen to defend Syracuse.

In terms of stats and talent, Clemson is the best run defense Syracuse has seen to this point. Do you think Shrader might have to make a few more plays with his arm to realistically give the Orange a chance?

I think so. They’ve had big games (running the ball), but Liberty isn’t a great team defending the run. Wake’s weakness is probably its run defense. I know Clemson is missing some guys up front, but it’s Clemson. They have the athletes that might shut down Syracuse’s running game, and I have to think that they can. He’s going to have make them pay for putting the attention on the running game. We have’t seen him do that this year. But yeah, to me, that’s Syracuse’s chance. As Clemson tries to shut down the running game, because that’s what they should do, Syracuse has to get some big plays (in the passing game).

Switching to the other side of the ball, what is Syracuse’s defensive scheme? And do you anticipate them changing anything considering how much Clemson has struggled offensively?

They run a 3-3-5 (base) with a ton of movement trying to create a lot of uncertainty. One of those linebackers will usually end up on the defensive line at the start of the play, but you usually don’t know which one it’s going to be. The quickness from the extra players kind of allows them to do stunts and delayed blitzes. They can’t outmuscle and they can’t just outpersonnel you, so they’re trying to create confusion in the offense. That said, they do have pretty good personnel. Their defensive line is a bunch of older guys that hold up pretty well. The strength of their team is probably the linebackers. Mikel Jones, the middle linebacker, is very good and goes kind of side to side. Marlowe Wax is a really good outside linebacker, so they have a pretty good linebacker group. And then their cornerbacks are young but very talented. Garrett Williams, on one side, was talked about as a potential first-round draft pick by some of those mock draft sites before the season, so he’s clearly a talented guy. And Duce Chestnut, on the other side, is their best freshman.

Who could be an X-factor for Syracuse in this game?

They’re so reliant on Tucker and Shrader that it’s hard (to choose), but Courtney Jackson, to me, is a wide receiver that’s smart. And with Shrader running around a lot, he’s shown an ability to kind of find openings in the defense with the extra time. And I think he and Shrader sort of have the best connection from quarterback to wide receiver. That’s sort of damning with faint praise there because none of the connections are very good, but Courtney Jackson is the guy that has really kind of benefited from Shrader taking over. He’s been the closest to kind of making some plays in the passing game.

For people that may not know or aren’t all that familiar with Syracuse’s home stadium, what’s the setting and environment like inside the Carrier Dome?

The crowds have not been great this year. They’ve struggled and fan support has dwindled, and they have the strictest COVID protocols in the country. But they’ve redone the roof, which seems to have only made the place louder. The student section has been very good this year by Syracuse’s standards. (Liberty coach) Hugh Freeze, after the Liberty game, complained about how disruptive the fans were. They’ve got some new lights in there, so some of the lights can kind of be tricky for guys in there for the first time. So there’s a chance the environment kind of messes with Clemson a little bit. It’s not easy despite how it might look on TV. 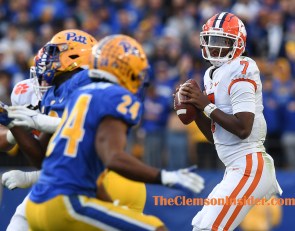