Jordan McFadden’s comments are resonating, and not necessarily in the way his teammates, Clemson’s coaches and the Tigers’ fan base had hoped.

“Our defense has done a great job having our back, and I feel like it’s time for us to have their back,” Clemson’s left tackle said last week ahead of the Tigers’ trip to Syracuse.

Technically, the offense helped enough, though the term “help” is being used fast and loose here. All of the points in the Tigers’ latest escape Friday were produced by the offense. Once again, though, they were few and far between.

The Tigers (4-2, 3-1 ACC) did have their highest-scoring first half of the season, but Clemson needed the assistance of a fake punt to pull that off. Clemson scored two touchdowns in the second quarter but went the other three quarters without any, using B.T. Potter’s 40-yard field goal early in the fourth quarter to survive.

Even the Tigers’ ability to do that was in question late. Had Syracuse’s Andrew Szmyt, a former Groza Award winner, not pulled his kick in the final minute, Clemson would’ve needed overtime against a .500 Syracuse team that put up a commendable fight against unbeaten Wake Forest a week earlier but also lost by double digits at Rutgers earlier this season.

Clemson coach Dabo Swinney and some of his players have been telling whoever’s willing to listen for the last couple of weeks that this offense is close to breaking out, confidence seemingly birthed out of the Boston College win — one in which the Tigers had their second-highest yardage output of the season (438). But what transpired inside the Carrier Dome looked more like the offense that’s spent the season ranked near the bottom nationally in virtually every major offensive statistical category.

D.J. Uiagalalei’s accuracy was the best it’s been in almost a month from a statistical standpoint (62% completion rate), and it could’ve been a lot better if not for a handful of drops by his receivers. Davis Allen (eight catches for 49 yards) was as involved in the passing game as a Clemson tight end has been in almost a decade, but there weren’t many explosive plays to speak of. And the running game reverted to its pedestrian ways behind an offensive line that can’t seem to catch a break.

That unit continues to be in flux, though it seemed like Clemson had found its best combination up front against Boston College when Matt Bockhorst moved to guard to fill in for an injured Will Putnam and Hunter Rayburn took over at center. The coaching staff also felt Bockhorst worked better at his more natural position given he was back at left guard (where he played last season) against Syracuse with Putnam back in the lineup, but the group was forced to start its fourth different combination in six games when Rayburn was put in COVID-19 protocols late last week.

Rather than move Bockhorst back to center, sophomore Mason Trotter, whose playing time had been limited this season in large part because of a broken hand, got his first career at center. The push up front was inconsistent. Kobe Pace had 76 yards on 14 carries, but the Tigers averaged just 3.1 yards a tote. Even if you don’t count sacks and a snap over Uiagalelei’s head early in the second half that killed a promising drive, Clemson ran for just 149 yards.

The stat sheet shows Clemson gave up just two sacks, but Tigers’ offensive line repeatedly got beat in pass protection and failed to pick up free rushers at times. The only reason the Orange didn’t bring Uiagalelei down more behind the line of scrimmage was all Uiagalelei and his ability to shake defenders off. Trotter’s botched snap and more penalties (seven for 60 yards) only compounded the problem the Tigers have of getting out of their own way at times.

Add those self-inflicted miscues to the drops and, well…

Now the defense wasn’t perfect either. The Tigers yielded 138 rushing yards in the first half alone. There was also that 62-yard bomb over the top that got Syracuse within one score midway through the fourth quarter, but the offense’s dysfunction at times continues to put all the pressure on the defense, which is looking more and more like a risky proposition given the frequency with which injuries are piling up on the defensive side of the ball.

It’s also not having their back the way the defense has for the offense all season.

The Tigers can’t wait around any longer for that to happen. Because the sand on Clemson’s talking hourglass is about to run out. Awaiting the Tigers next? A trip to Pittsburgh on Saturday for a game that, in all likelihood, isn’t going to be played in the teens. Not from the Panthers’ perspective, at least.

Pitt began last week as the highest-scoring team in the Football Bowl Subdivision. The Panthers, led by fifth-year quarterback Kenny Pickett, have been scoring so much that their 28 points at Virginia Tech in a three-touchdown victory over the weekend actually dropped them to third in that category at 48.3 points per game.

Syracuse was averaging 31 points before scoring a little less than half of that against Clemson. But do the math on Pitt, and even if the Tigers were to hold the Panthers to half of their season average, that would still put Pitt in the mid-20s, a range that almost seems like a pipe dream for the Tigers at this point.

Clemson has only mustered 74 points against FBS opponents all season. That’s 14.8 per game. The Tigers’ highest point total against someone not named South Carolina State is 21 at North Carolina State, and Clemson needed overtime to get there.

The Wolfpack scored 27 points in that one, which, not coincidentally, resulted in Clemson’s second and most recent loss. Even if the Tigers can hold Pitt to 24 points on its home field, can they score enough for it to matter?

They’ll have to if they want any chance to keep themselves in contention of playing for a seventh straight ACC championship. N.C. State knocked off Boston College on the road Saturday to remain unbeaten in league play. It also helped the Wolfpack maintain what amounts to a two-game lead over Clemson since they hold the head-to-head tiebreaker over the Tigers.

Of course, Wake Forest, with its perfect 4-0 conference record, is the team everyone is chasing in the Atlantic Division. Clemson will host the Demon Deacons, who are right behind Pitt in scoring at 38.7 points per game, in late November. The Tigers also have a trip to Louisville (32.3 points per game) looming Nov. 6, meaning Clemson still has to play three of the five highest-scoring teams in the league.

The Tigers, meanwhile, are last in that department.

“We’re nowhere near what we thought we’d be, but we’re continuing to battle,” Swinney said of the offense. “We’ve got to continue to help them as coaches, keep them encouraged and continue to just coach our tails off.”

What Clemson needs more than anything right now is points. And they had better come in a hurry. 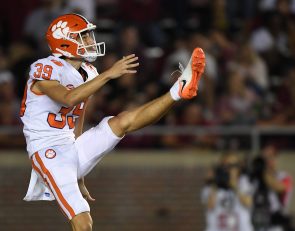 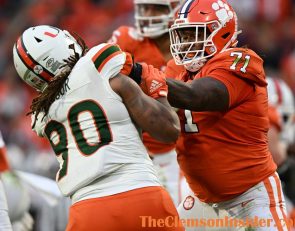