No one loved Clemson as much as Mr. Joe

No one loved Clemson as much as Mr. Joe

On Wednesday, Clemson lost one of its biggest and proudest supporters. Joe Cocke, who lived for a century, passed away with his family by his side after an extended illness.

In his later years, Cocke could be found surfing the message boards and engaging with all Clemson fans, including on The Clemson Insider, where his tag was Joe21. We all called him Mr. Joe.

A few years back, I was given the assignment to write a series of stories on Mr. Joe, who was a veteran of War World II and the Korean War. It is one of the best assignments I have had in my career as a sportswriter. Mr. Joe loved Clemson and he loved to tell anyone about it.

Mr. Joe’s passion for Clemson takes a backseat to no one. Also, his stories were the best, one of the last to have personal accounts with some of Clemson’s biggest legends, going all the way back to the Frank Howard coaching era.

When I visited Mr. Joe’s home in late June of 2019, hanging over the door in his den was a picture of Memorial Stadium from October 23, 1999.

What’s the significance of that game?

It is still the largest crowd in Clemson to watch a football game, as 86,092 fans showed up and packed Death Valley. It was also the first game between father and son head coaches in the history of college football, as Bobby Bowden’s Florida State Seminoles played Tommy Bowden’s Clemson Tigers in what was dubbed the Bowden Bowl.

But that’s not why the picture was significant to Mr. Joe. For him it means a lot more. His late wife, Mary Lynn, gave him the picture.

“She loved Clemson,” he said smiling proudly as he spoke about Mary Lynn. “She loved to talk about Clemson and always had little (stuffed animal) Tigers and Tiger Paws all over the house. She even wore a Tiger Paw on her glasses.”

Traces of Mary Lynn were all over Mr. Joe’s home. There are a couple Tiger Paw coasters on a coffee table in the den, along with a couple of Clemson plaques hanging on the wall and a framed knitted keepsake Mary Lynn did herself to commemorate the 1981 National Championship season.

In the living room, a stuffed animal Tiger sat on top of a chair and a drawn picture of a Tiger was on the wall in Joe’s office. There was little doubt who they pulled for when you stepped into the Cockes’ home.

It’s been like this since the first time they came to Clemson in 1955, when Mr. Joe took a job with the Southeastern Cotton and Ginning Research Laboratory.

“The next morning after we got here, I went down to the Post Office and I was going in, and here came Frank Howard coming out of the Post Office,” he recalled. “He said, ‘How are you doing Good Buddy!?’”

At the time, Clemson was in its first year as a regular college and had about 2,500 students. The city of Clemson was even smaller with less than 2,000 residents.

“The only traffic light was down there by College Avenue and Highway 93,” Mr. Joe said. 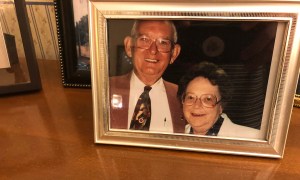 Joe and Mary Lynn Cocke fell in love with every aspect of Clemson when they came to the small South Carolina town in 1955. Joe got a second degree from Clemson, while Mary Lynn worked for the University. (file photo/The Clemson Insider)

Though they were from Florida and graduated from the University of Florida, Joe and Mary Lynn Cocke fell in love with every aspect of Clemson. Joe went to school there, getting a second degree in agricultural engineering in 1963, while Mary Lynn worked for Clemson as a botanist. They raised their two daughters Linda and Suzanne and settled into the Methodist Church, where he attended all the way up to his death.

“We liked it. We liked the small-town atmosphere,” said Mr. Joe. “You knew everybody here just about.”

And, of course, everyone loved the Tigers. It did not take long for Joe and Mary Lynn to become Clemson fans, too.

They became diehard Clemson fans and raised their daughters as such, while following the football team to almost every game when they could and also supporting the basketball, baseball and Olympic sports squads as well.

“It was just a process,” Mr. Joe said. “My wife, she worked for Clemson and she was a Florida Gator, but when she came to Clemson, she became a diehard Tiger fan. When Clemson lost, there were tears around here. She was diehard. She took a loss bad.”

The Cockes just weren’t passionate about Clemson, they wanted to convert anyone they could into Tiger fans, which is why Joe began passing out little Clemson stickers to everyone he could. Through his work, and later in his retirement with the Lions Club, he traveled the globe and left the Tiger Paw anywhere he could.

There are people in Europe, Australia, China, Pakistan, Russia, Africa, Japan, Taiwan and Korea that know Clemson and the Tiger Paw because of Joe Cocke. Since 1987, when the Cockes went on a trip to Korea, he has handed out more than 15,000 Tiger Paw stickers.

“It publicizes Clemson, and it gives you a chance to talk to people,” Mr. Joe said. “There are several places we have been. I have given away hundreds of Tiger Paws on different trips. You would be surprised how many know who Clemson is and if they don’t, you have the opportunity to tell them about it. That is the thing. You tell them that when they see the Tiger Paw, now they know that is Clemson.”

And because of that they know Clemson is special, just like Joe and Mary Lynn did when they rode into Clemson for the first time, way back in 1955.