LOUISVILLE, Ky. — Clemson coach Dabo Swinney updated the status of two starters that were injured during the Tigers’ win over Louisville and didn’t return.

Cornerback Andrew Booth and running back Kobe Pace both sustained blows to the head that ended their nights in the first half Saturday at Cardinal Stadium. Swinney said Pace is going through concussion protocol while Booth may be headed in that direction as well, though Booth was held out as a precautionary measure before the full extent of his injury is known.

Swinney said Booth is also dealing with a stinger. But Swinney and defensive coordinator Brent Venables said he was celebrating with the team in the locker room after Clemson’s 30-24 win.

“He seemed fine after the game,” Swinney said.

Pace, in his first game back after missing last week’s game against Florida State because of COVID-19 protocols, had just two carries for 14 yards before sustaining the injury. 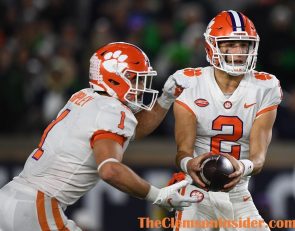