Clemson recently played host to a top-50 national recruit ranked as the No. 1 prospect in the Palmetto State for the class of 2023.

It marked the first game-day recruiting trip to Clemson for McLeod, who is the top-ranked prospect in the state of South Carolina, No. 11 defensive lineman nationally and No. 47 overall prospect in his class according to the 247Sports Composite.

“It was a great visit,” McLeod said to The Clemson Insider. “It was great getting out there and finally getting out for a game day. A great crowd, great intensity.”

McLeod (6-4, 315) came away impressed by the game-day visit in a variety of ways, but especially by Clemson head man Dabo Swinney and his staff.

“Great coaching staff,” McLeod said of what stood out to him about the visit. “I like seeing Dabo Swinney because he’s a great coach. That aspect, and then the team working together, defense looking great, firing on all cylinders, and it was just a great game all around and great fan support.”

“I think they’re a great coaching program at Clemson,” he added. “They’ve obviously got a goal they’re trying to reach, and Coach Swinney, of course he’s the man to bring it all together. He’s a really great guy.” 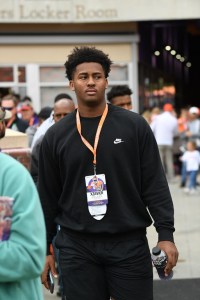 McLeod also had the chance to chop it up with Swinney following the Tigers’ 30-20 win over the Seminoles.

“The longest time I got to talk to Coach Swinney was after the game,” he said. “But mostly I heard from him, it was a great win. He was very happy about the win. And Coach Bates, he was just excited to have me down there. He was just going on about me coming to the first game and he would like to see me at more as we progress (in the recruiting process).”

Prior to his visit for the FSU game, McLeod was previously on campus for the Swinney Camp in June when he worked out with Bates and received constructive feedback regarding his game.

“He gave me a couple things to fix,” McLeod said. “He said footwork, get better with speed and some other stuff. But last time I talked to him, he said he checked my film and everything was looking good, like I got way better than I was.”

McLeod has also made game-day trips to see South Carolina, North Carolina, Georgia, Florida State and Alabama this season. With the exception of the Crimson Tide, all of those schools have offered McLeod, along with Auburn, NC State, Ole Miss, Tennessee, Kentucky, Louisville and Virginia.

McLeod, who says his recruitment is “pretty wide open” right now, cited South Carolina, Georgia, NC State and Ole Miss as some of the schools showing the most interest at this point in the process.

Although McLeod grew up a fan of the Gamecocks, the Tigers have made a big impression on the in-state standout, and he would love to get an offer from Clemson and have an opportunity to suit up for Swinney’s team.

“Like I said, Dabo Swinney, he’s a great guy,” McLeod said. “He is a great coach. He has this great mentality as a coach. Whether you lose or not, he’s going to love you unconditionally.”