Among a contingent of prospects from a familiar California powerhouse that attended Louisville’s game against Clemson last Saturday at Cardinal Stadium was Peyton Woodyard, who is on the Tigers’ recruiting radar for the class of 2024.

The Clemson Insider caught up with Woodyard, a four-star safety from St. Bohn Bosco (Bellflower, Calif.), to get his thoughts on Clemson’s 30-24 win and more.

“What a game!” Woodyard said. “There were a lot of us Bosco football players that went to the Louisville vs. Clemson game. I thought both teams played hard and deserved to win. Clemson’s defense was ultimately able to hold Louisville out of the end zone at the end. Great pursuit of a great quarterback.”

Along with seeing Clemson’s defense save the win thanks to its late goal-line stand against Malik Cunningham and the Cardinals, Woodyard enjoyed watching two St. John Bosco products – D.J. Uiagalelei and Beaux Collins – hook up for a 46-yard touchdown throw and catch in the first quarter for the Tigers.

“It was also great to see that D.J. to Beaux connection again,” Woodyard said. “Those two are my big bros, we’re all part of the Bosco brotherhood. We also train together at STARS.” 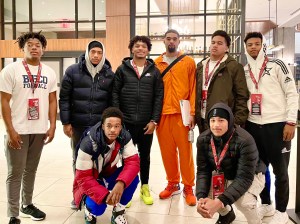 Woodyard had a chance to speak with Uiagalelei a little bit on Saturday morning and was impressed by the way he battled through a knee injury to help the Tigers to a victory that night.

“I got to see and talk to D.J. briefly at the hotel,” Woodyard said. “We just said hello in passing, and he played great given that he was injured. D.J. has always been a great leader and player, so I am not surprised on how he played.”

Woodyard (6-2, 191) has already racked up more than 20 offers, including one from Louisville and others from schools like Alabama, Georgia, Notre Dame, Oklahoma, Ohio State, Michigan, Southern Cal, Arizona State, Florida State and Penn State.

Clemson doesn’t offer sophomores such as Woodyard, though he’s holding out for a coveted offer from the Tigers and had this to say about them last month:

“I haven’t heard anything from them, but I know they’re looking,” he told TCI. “Coach (Brent) Venables follows me on Twitter. I haven’t been able to talk to him ever since I’ve been up there, since this past summer. I definitely want to get back up there after this season and go on a visit.”

Woodyard visited Clemson for the Dabo Swinney Camp in June and is already planning a return trip to Tiger Town next year.

“I plan on getting over in the spring with my family,” he said.

Along with Louisville, Woodyard has attended a game at Notre Dame this season, as well as a few games at Southern Cal. Besides Clemson, he’s looking to get back to Ohio State, Alabama and Georgia, and also wants to check out Boston College, Oklahoma and LSU moving forward.

Woodyard is ranked by 247Sports as the No. 4 prospect in California, No. 2 safety nationally and No. 20 overall prospect for the 2024 class.