Clemson shoots past Bryant in rout

Clemson shoots past Bryant in rout

The Tigers carved up Bryant’s zone defense and eventually tightened things up on the defensive end to beat the Bulldogs, 93-70, at Littlejohn Coliseum. Hunter Tyson led five double-figure scorers for Clemson (3-0) with 20 points while Nick Honor added 16 points and a career-high seven assists for the Tigers, who, for the first time this season, didn’t have to overcome a second-half deficit.

PJ Hall added 14 points in 24 minutes while Al-Amir Dawes and David Collins chipped in 11 and 10, respectively, for Clemson, which added to a 12-point halftime lead by shooting a season-high 56% from the field. The Tigers went inside and out against the Bulldogs’ 2-3 zone, scoring 40 points in the paint and knocking down a season-high 10 3-pointers. Hall, fresh off a 21-point outing against Wofford on Friday, finished 7 of 13 from the field while Tyson, Honor and Dawes had the hot hands from distance, combining to shoot 8 of 13 from beyond the arc.

Peter Kiss led Bryant (1-2) with 24 points while Chris Childs chipped in 15, but Clemson led by as many as 26 thanks to its defense eventually catching up to the offense. The Tigers held Bryant to just two 3-pointers in the final 20 minutes, a stark contrast to a first half that saw the Bulldogs make more than 53% of their shots.

“We really wanted to try to go out in the second half and try to take (Kiss and Childs) away,” Tyson said.

Bryant threw in some man defense and even extended its defensive pressure the length of the court at times, but Clemson finished with 20 assists on 35 made baskets and only committed seven turnovers. Collins also had nine rebounds for the Tigers, who finished plus-12 (39-27) on the boards.

“Bryant just does so many things — different presses, different zones, zone to man — that you’ve got to be organized,” Brownell said. “Coming off a high-turnover game (against Wofford), to play these guys with this many possessions and only have seven was outstanding. We got really good play from a lot of players.”

Clemson came out humming against Bryant’s defense, getting almost any look it wanted with crisp ball movement. The Tigers made a point to work it inside to Hall, who had 10 points on 5 of 7 shooting to go along with five rebounds in the first 20 minutes.

Tyson complemented that with 11 points as the Tigers shot better than 63% from the floor in the first half. But Bryant got hot from deep to stay close early.

The Bulldogs, behind Kiss’ 17 first-half points, made seven of eight shots at one point with four of those baskets coming from 3-point range. Bryant sank seven 3s in the opening 20 minutes and ripped off a quick 16-7 run to take a 30-28 lead on Kiss’ layup with 6 minutes, 53 seconds left in the half.

But Tyson answered with a corner 3 on Clemson’s next possession, which ignited another surge for the Tigers. Clemson sank a trio of treys in the final 2:29, including Dawes’ buzzer-beater, and ended the half on a 24-10 run for a 52-40 advantage at the break.

The Tigers held Bryant to one bucket over the first 6 minutes and change coming out of the locker room, and back-to-back 3s from Honor capped a 17-8 spurt that gave Clemson a 21-point lead with 13:15 left. The Tigers cruised from there.

“Bryant showed how electric they can be,” Brownell said. “They have three guys that can go get 25 (points), and our idea was, hey, we can have one, but if they get two up there, it could be a hard night. In the first half, when Childs was hitting 3s, it was looking like it may be that way.

“We made a couple of adjustments did a better job defensively in the second half and pulled away for a really nice win.”

Clemson will now take its show on the road for the first time this season. The Tigers will face Temple on Thursday in the first round of the Charleston Classic. 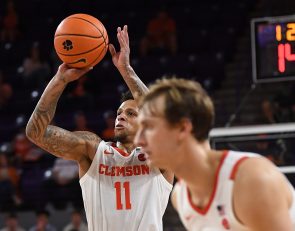 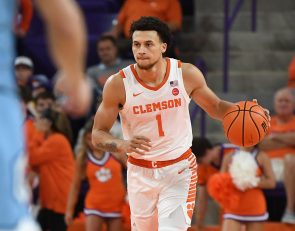 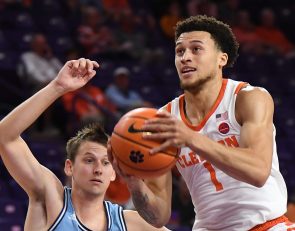