Swinney reflects on his best memories at Williams-Brice Stadium

Swinney reflects on his best memories at Williams-Brice Stadium

Dabo Swinney has plenty of fond recollections – and a few bad ones, too – from his experiences as part of games against South Carolina at Williams-Brice Stadium.

But Swinney’s best memory came in his first game at Williams-Brice – in 2003, when he was in his first year as Clemson’s wide receivers coach, and the Tigers throttled the Gamecocks by a score of 63-17.

“I’ve got a lot of good memories – none better than my first one, that’s for sure, in ’03,” Swinney said during his Zoom media availability Wednesday evening. “That was a great memory. I think it was at night. I can’t really remember, to be honest with you.”

Indeed, like this Saturday’s 7:30 p.m. matchup between Clemson (8-3) and South Carolina (6-5) at Williams-Brice, the rivalry affair on Nov. 22, 2003, took place under the lights in Columbia. Charlie Whitehurst threw four touchdown passes, helping a Tommy Bowden-led Tigers team set the record for the most points scored by either team in the series that dates back to 1896.

While that night stands out to Swinney, it’s not the only game at Williams-Brice that he can look back on and smile about.

Clemson’s head coach also recalled the night in Columbia on Nov. 24, 2007, when Tigers kicker Mark Buchholz nailed a 35-yard field goal as time expired to give his team a 23-21 victory. Aaron Kelly had a 12-yard reception from Cullen Harper on fourth-and-4 to extend the eventual game-winning drive.

Two years earlier, in 2005 – a year after The Brawl – Whitehurst finished his career against South Carolina undefeated at 4-0 with a 13-9 win in Columbia. James Davis scored the eventual game-winning touchdown on a 2-yard run with 5:58 remaining, capping a drive during which the Tigers overcame a first-and-35 with the help of a 28-yard pass from Whitehurst to Curtis Baham on third-and-12.

“I remember we made a game-winning kick down there,” Swinney said. “I remember coaching the receivers. We overcame a first-and-35, and we had to hit some big plays. I remember a big fourth-and-4 that we had to convert, and we hit Aaron Kelly on a slant. A great release, technique, and that was a huge play in the game to keep us alive, and then we went on to score. I remember hitting Curtis Baham on a third-and-long one time, on a game-winning drive.”

Swinney was named Clemson’s full-time head coach on Dec. 1, 2008 – a day after the Tigers’ 31-14 victory over the Gamecocks at Death Valley.

After getting the full-time gig, Swinney’s teams lost five in a row to South Carolina – including three in Columbia – but have since won the last six meetings and hope to make it seven in a row over the Gamecocks on Saturday night.

“I’ve got a lot of great memories,” Swinney said, reflecting on his experiences at Williams-Brice. “I’ve got some bad ones, too. So, appreciate you not asking about those.” 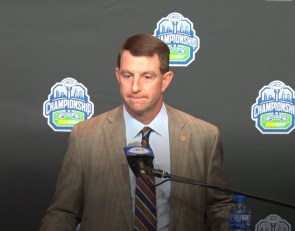