Will Shipley joined elite company with another strong performance Saturday night, and the Clemson freshman running back is honored to be mentioned in the same breath as a Tiger legend – who is now his position coach.

Shipley rushed 19 times for a career-high-tying 128 yards in Clemson’s 30-0 win over South Carolina at Williams-Brice Stadium and opened the scoring with a 29-yard touchdown run on the Tigers’ opening drive.

With his 10th rushing touchdown of the season, Shipley tied former Clemson great and current running backs coach C.J. Spiller (10 in 2006) for second on the leaderboard for rushing touchdowns by a Clemson true freshman since 1972. He now trails only Travis Etienne (13 in 2017) in that category.

“That’s the first time I’ve heard that. It puts a smile on my face,” Shipley said after Saturday’s game when The Clemson Insider asked him about joining Spiller atop the Clemson record books. “It’s pretty awesome to see the hard work paying off a little bit.” 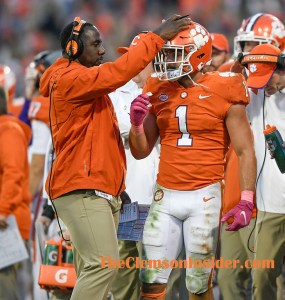 Clemson running back Will Shipley (1) is congratulated by running backs coach C.J. Spiller after scoring on a 21-yard carry against Florida State during the 4th quarter Saturday, October 30, 2021 at Clemson’s Memorial Stadium. Bart Boatwright/The Clemson Insider

Shipley, who ran for 112 yards and two touchdowns in Clemson’s win over Wake Forest on Nov. 20, has now recorded back-to-back 100-yard rushing games for the first time in his career. He became the first true freshman to accomplish the feat since Spiller against NC State and South Carolina in 2006.

A former five-star prospect from Weddington High School in Matthews, N.C., Shipley has rushed for 678 yards and 10 touchdowns in nine games this season while adding 63 yards on 11 receptions.

Shipley credits his teammates for the success he’s had in his first year as a Tiger, and while his individual accomplishments are gratifying, he’s even happier about how Clemson (9-3, 6-2 ACC) responded with five straight wins down the stretch following a 4-3 start to the season.

Shipley’s focus right now is on helping the Tigers earn their 10th win with a bowl game victory, but he is truly honored to be mentioned alongside Spiller for what he’s done on the field as a true freshman.

“I’m just glad this football team’s where it’s at. We’ve responded so well,” Shipley said. “We’ve done a great job as a football team. We’ve got one left. We’re here to finish that. So, I just think it goes to them because I’ve played for them. I do everything I do, for my teammates. So, they’ve allowed me to kind of get there.

“But in terms of being even mentioned with C.J. Spiller, I don’t even really know what to say about it. To see the way that he changed college football… just being in the same room as his name is an honor for me. It truly is.”