In the latest edition of “What They Are Saying,” we take a look at what’s being said on Twitter about Westlake’s (Texas) starting quarterback:

Clemson commit Cade Klubnik ready to roll. Westlake and Vandegrift meeting in the 6A D2 State Quarterfinals at DKR-TMS. pic.twitter.com/jwE89YaqQF

TD Westlake! That was quick! 42-yard pass from Cade Klubnik to Jaden Greathouse sets up a 12-yd TD run from Jack Kayser.

Cade Klubnik with a six-yard touchdown run. He's up to 46 yards on the ground and 57 through the air with Clemson head coach Dabo Swinney in the building.

Chaps boost their lead over Austin Vandegrift to 21-0 with 9:58 to go until halftime #txhsfb #txhsfbplayoffs pic.twitter.com/fGbSqFwioM

Cade Klubnik scored his 32nd rushing TD of his Westlake career! The Chaps lead the Vipers 21-0 at the beginning of the 2nd quarter! #GoChaps pic.twitter.com/lOGRIqg2fd

Jack Kayser with 6 first half rushing TD's and Westlake continues to steam roll anyone in their path. They beat Vandegrift 70-7 and will face Katy in the state semifinals 2pm next Saturday at McLane Stadium. @CadeKlubnikQB @jadengreat1 @jackkayser21 @Keaton_Kubecka pic.twitter.com/olTD5VMJvr 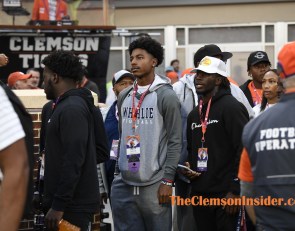