When the Atlanta Falcons made A.J. Terrell a first-round pick, selecting the former Clemson cornerback 16th overall in the 2020 NFL Draft, there were many who questioned the pick coming off of Terrell’s atypically subpar showing in the national championship game against LSU that January.

It’s safe to say Terrell took notice of the critics, and he is proving them wrong. Now in his second season with the Falcons, Terrell is shining during what has been a breakout campaign.

“Short-term memory. You know, everybody got an opinion,” Terrell said, via AtlantaFalcons.com, of not focusing on the criticism regarding his draft selection. “You know, play good they love you play bad they don’t, so that’s how I’ve been, you know, forever like just being young all the way up you never did good enough. So just gotta keep a chip on your shoulder and stack days.”

Terrell is giving the Falcons a great return on investment so far, having emerged as one of the NFL’s top corners at this young stage of his career. According to Pro Football Focus, his 88.2 coverage grade this season is the highest in the NFL.

One of the keys to Terrell’s success in year two in the league?

Terrell credits how he has taken care of himself physically, or as he calls it, “prehab.”

“I used to not really go into the treatment room often,” Terrell said. “I mean like I didn’t really go in there unless something was hurting. But now, just knowing that you know, I go in there and get in the ice tub, hot tub, use the Theragun [handheld therapy device]. Just prevent injuries.

“[It’s] prehabing, not rehabbing; prehab. So that’s really like the main thing, even when I don’t feel like doing anything, just going in and doing something to make you feel good.” 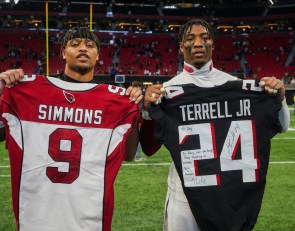 What They Are Saying: Tigers in the NFL, Week 17 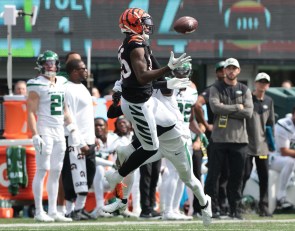 'Tee Higgins is like that': Former Tiger draws praise from Pro Bowl CB