As he spoke about his new job Monday, Brent Venables confirmed he turned down another one last year.

But Clemson’s former defensive coordinator finally has his first head coaching job at the University of Oklahoma. As for what finally convinced him this was the right time to make the move – beyond the fact OU is a place he’s all too familiar with having spent 13 seasons as an assistant under former Sooners coach Bob Stoops – Venables said it was a recent conversation he had with one of his daughters that closed the deal.

“Sometimes you need just a little bit more encouragement to get you pulled through the knothole,” Venables said while speaking during his official introduction Monday on OU’s campus. “So my daughter and I, about a month ago, were laying up in her bed, and we’re saying prayers. I’m always telling you to dream big, right? Don’t put limitations on yourself. Don’t let somebody tell you that you can’t accomplish something. So she says, ‘Well dad, why didn’t you take the Auburn job last year?’”

Venables was one of the candidates Auburn athletic director Allen Greene spoke to about its head coaching vacancy last December, but Venables, then nine seasons into his tenure as Clemson’s defensive coordinator, ultimately took his name out of the running. Auburn ended up hiring former Boise State coach Bryan Harsin.

“I’d made reference that I was a little bit nervous,” Venables said, referencing the interest from Auburn. “I really didn’t think we had the alignment there that we have here (at OU). So I was a little bit nervous, and I was scared for her. She said, ‘You don’t have to be scared. You told us to dream big.’ Chase your dreams, she told me. So they’re the ones that fueled me to make that final decision to say yes to Oklahoma. I want to thank my daughters.” 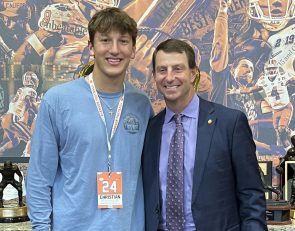 Clemson ‘filled all the boxes’ for 4-star TE commitment