A big and athletic defensive line prospect from the Lone Star State has Clemson on his recruiting radar, and vice versa.

There is mutual interest between the Tigers and Denison (Texas) High School four-star Xadavien Sims, the No. 7 D-lineman in the 2024 class per 247Sports.

“Clemson, they’re a really good school and all. I love Clemson … I love Clemson’s traditions and the way they do things,” Sims told The Clemson Insider recently. “And I’ve seen their facilities and stuff, and it looks good.” 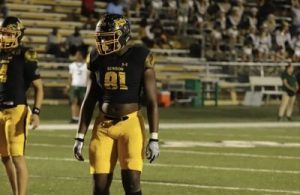 Sims, a 6-foot-4, 250-pound sophomore, already owns an offer from Arkansas while schools such as TCU, Texas, Texas A&M, Ole Miss and SMU have shown interest along with Clemson.

Sims hopes to show off his tools and talent in front of Clemson’s coaching staff if he is able to compete at the Dabo Swinney Camp next summer.

“Clemson Football (Twitter) page actually, they followed me last year, and their defensive line coach sent me the camps list for the summer they were going to have,” Sims said. “I’m really trying to make a Clemson camp next summer if I can.”

Sims played on both sides of the ball for Denison High this season, seeing action at tight end in addition to his duties at defensive end and defensive tackle.

“My strengths, I feel like I’ve been getting better at pass rushing and definitely stopping the run game and defeating pullers and stuff like that,” he said. “And very intelligent and (high) IQ on the defensive side.”

Sims is ranked by 247Sports as the No. 9 prospect from Texas, No. 7 defensive lineman nationally and No. 58 overall prospect in the country for the class of 2024.