If there’s any position group in the 2022 recruiting class that Clemson can hang its hat on, it’s the cornerback room.

Both cornerbacks will be coming in as mid-year enrollees and arrive on campus early next month.

“We have the homegrown kid in Jeadyn Lukus,” Reed said during Clemson Football’s National Signing Day Show. “He’s a phenomenal athlete. He’ll remind you a little of A.J. Terrell. Very physical. Comes from a good program. Very, super excited to have him in the room.”

“By far the best corner in this state and one of the best in the country,” Swinney said of Lukus. “The best way I can describe him is A.J. Terrell. He’s long and fast, a little longer than A.J.

“He can play the field. He can play the boundary. He can play the nickel. He really can do pretty much anything you want. Incredible athleticism, great ball skills and great long speed. Everybody’s looking for a guy like Jeadyn Lukus. They’re hard to find with that type of length. Really, really excited about him.”

Lukus (6-2, 185) is rated as a four-star prospect by the 247Sports Composite, which considers him the No. 2 prospect in the Palmetto State, No. 7 cornerback nationally and No. 39 overall prospect for the 2022 class regardless of position.

In the last three years, Lukus has totaled 97 tackles (eight for loss) and four interceptions to go with 17 passes deflected.

Reed is also fired up about the addition of Pride.

Pride (5-11, 185) is considered a national top-30 player according to 247Sports, which rated him No. 27 overall, fourth-best among cornerbacks and second-best in Missouri

As a senior, he recorded 84 total tackles and three interceptions.

“This kid right here can do it all,” Swinney said of Pride. “Different type of player than Jeadyn, but he can play anywhere you need him on the field. Physical, unbelievable feet and quickness and lateral movement. Very advanced as a young player, but again the thing that really stands out is that this kid is one of the best leaders you’re ever gonna meet.”

As their future position coach, Reed is chomping at the bit to get them on campus. Good thing he only has to wait a couple of weeks longer.

“I am super excited, it’s gonna be crazy,” he said. “I can’t wait to get my hands on these guys and get them in the room. I wish they could be here now.” 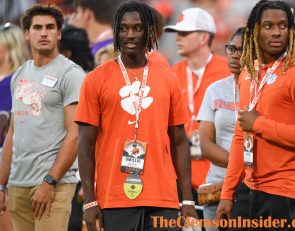