For the second straight season, Clemson’s matchup with its in-state rival on the hardwood is in jeopardy.

Clemson is slated to host South Carolina at Littlejohn Coliseum on Saturday at 8 p.m., but COVID-19 cases within the Gamecocks’ program are still a concern for both sides a little more than 24 hours away from the scheduled tip. Carolina coach Frank Martin announced earlier in the week that six of his players will miss the game because of a combination of injuries and COVID-19, though he didn’t specify how many of those were COVID cases.

On Friday morning, Clemson coach Brad Brownell was hoping the game could still be played. He said he hasn’t spoken directly with Martin but that the schools’ athletic directors had been in communication about the situation.

“It’ll be interesting to see what transpires, but certainly the health of their players is No. 1,” Brownell said. “We’ll see what happens with the game. But would love to get a chance to play. We’ll just have to wait and see.”

Martin told local media that his team underwent another round of testing Friday morning to see if any more of his players have tested positive. Carolina is supposed to get the results back between 2:30 p.m. and 3 p.m., which is roughly an hour before the Gamecocks are scheduled to leave Columbia, Martin said.

“God forbid, if we’ve get more positives, then obviously Clemson has to make a decision,” Martin said. “Let’s say we only have eight (players available). Do they still want to play a game with this thing kind of spreading in our locker room, and do we need to get on the bus and go if it continues to spread? That’s it. But the plan is to get on the bus and go.”

It’s a case of deja vu for Clemson and Carolina, which didn’t play their scheduled matchup last season because of COVID-related issues within the Gamecocks’ program. While no final decision has been made yet regarding this year’s meeting, Brownell said it’s “a scary time” not knowing if Saturday’s game and any others on the schedule will once again be affected by COVID-19.

Brownell said he and his coaching staff recently reminded their players to be careful.

“We’ve been OK to date, but now you look around college basketball and you see a lot of cancellations, so you know we’re certainly not anywhere out of the woods,” Brownell said. “This thing might just be getting started here with everyone going indoors.” 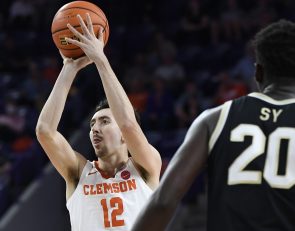 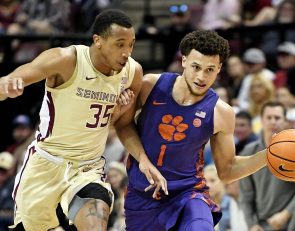