Randall, Williams were ‘born and groomed’ to play wideout at Clemson

Randall, Williams were ‘born and groomed’ to play wideout at Clemson

Clemson’s two new wide receiver signees were destined to become Tigers and fulfilled that destiny when they inked with Dabo Swinney’s program on Wednesday, the first day of the early signing period for college football.

Not only are Adam Randall and Antonio Williams both four-star recruits from the Palmetto State and each ranked as top-150 national prospects in the 2022 class, but they both wore No. 8 for their respective high school teams, and also share the same birthday – they were both born on July 14, 2004.

“I guess it was just a great day to be born to play wide receiver at Clemson because (Williams), not only is he from South Carolina, but he and Adam have the exact same birthday,” Swinney pointed out Wednesday during Clemson Football’s National Signing Day Show.

“So, they were both literally born – I guess that was ’04, holy cow – they were born and groomed to come play wideout for the Clemson Tigers.”

With the additions of Randall and Williams, Clemson signed two in-state wide receivers in a single class for the first time since 2011, when the Tigers signed Dorman’s Charone Peake and Adam Humphries – a duo that has gone on to combine for more than 325 receptions and more than 3,200 receiving yards in the NFL.

A product of Myrtle Beach High School, Randall will be Clemson’s first receiver from the Myrtle Beach area since Hunter Renfrow (2014-18), who began his storied Clemson career as a walk-on.

Randall, listed at 6-foot-3, 215 pounds and possessing freakish athleticism, has garnered the nickname “Baby Julio” in comparison to star NFL wideout Julio Jones. Randall will continue to wear the No. 8 he donned in high school and will be the next player to sport that number for the Tigers, following Justyn Ross.

“They call him ‘Baby Julio,’” Swinney said. “He’s going to be No. 8. So, he’ll be taking Justyn Ross’s jersey, and y’all are going to feel like Justyn Ross grew a little bit. This is a big, big, strong man. Unbelievable player. One of the best kids.”

Randall, who committed to Clemson on Christmas Day 2020, plans to play in the Under Armour All-America Game in Orlando in January and is expected to enroll at Clemson in January as well.

Randall was one of five finalists for Mr. Football in South Carolina and a first-team All-State 4A selection by the South Carolina Coaches Association as a senior this season, when he posted 1,267 receiving yards on 65 catches with 16 touchdowns. He played in the North-South All-Star Game in Myrtle Beach and was a Shrine Bowl selection for South Carolina.

“Adam Randall comes from a phenomenal program in Myrtle Beach High School with Mickey Wilson, and so he’s well coached,” Clemson wide receivers coach Tyler Grisham said via Randall’s official Clemson bio. “He’s got great coaches. He also has great trainers he works with on the side. So, he’s always working on his craft. And what you’ll see is he’s a big-bodied receiver. Has a great frame, but he’s worked on his speed. So, he can outrun his competition, which is a deadly combination, that size and speed. But because of how well he’s coached, he’s a great route runner, can sink his hips, get in and out of his breaks with ease, can run any route you throw at him, and he also is able to go up and make the contested play. He’s a big-bodied guy – man, just throw it up and give him a chance. So, he can do it all.”

As for Williams, he was a late pickup for Clemson, which beat out South Carolina and Auburn among others to land his commitment on Dec. 9, just six days prior to the start of the early signing period.

Williams is a highly regarded player from Dutch Fork High School, where he was teammates with Clemson’s Will Taylor in 2020. Williams is ranked as a top-100 player nationally by ESPN, which considers him the No. 83 overall player in the nation, the ninth-best receiver and the third-best player in South Carolina.

Like Randall, Williams plans to play in the Under Armour All-America Game next month. He played on three state championship teams at Dutch Fork and lost only one game in his high school career, which saw him finish with 137 career catches for 2,458 yards and 23 touchdowns.

As a senior in 2021, Williams tallied 85 catches for 1,625 yards (including 10 100-yard receiving games) and 15 scores while helping Dutch Fork reach the state championship game and finish with a 12-1 record.

Williams plans to enroll at Clemson in summer of 2022.

“We’re excited about Antonio, man,” Grisham said via Williams’ official Clemson bio. “He comes from a phenomenal program in Dutch Fork, a winning program, and his skillset is phenomenal. He’s very versatile and can play the slot. He has great acceleration, short-area quickness, YAC (yards after catch) – definitely what we are looking for, too, from that slot position. But he also has good length. He can play outside at the field position, and phenomenal route runner. He has had phenomenal receiver coaches and has always worked on his craft. So, definitely excited to bring him into the wide receiver room.” 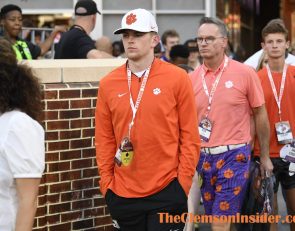