Despite a great game from Brice, who finished with 317 yards through the air and 3 TDs, his team ended up getting blown out 59-38. Brice went down early in the 4th quarter with an injury and did not return.

With his 300-yard performance, Brice broke the record for most passing yards in a season for an App State QB.

Most Clemson fans remember Brice for his massive 4th quarter comeback win over Syracuse in 2018, filling in for an injured Trevor Lawrence — including a clutch 4th-and-6 conversion that kept the game-wining drive alive. It was a win that was crucial for a Tiger team that ended up winning the national title.

Brice plans to return to App State for the 2022 season.

A lot to still be thankful for.. The sun will shine again tomorrow & another 24 hrs will begin.

Can’t thank these seniors enough. I came in brand new & they embraced me with open arms. This is home. 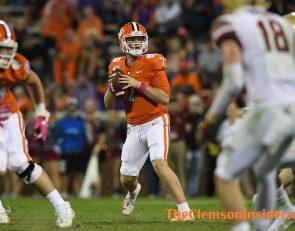