What They Are Saying: Clemson signees shine in state championship victories

What They Are Saying: Clemson signees shine in state championship victories

Saturday night was a big one for two of Clemson’s signees.

Both Westlake (Texas) five-star quarterback Cade Klubnik and Jesuit (Tampa, Fla.) three-star linebacker Wade Woodaz played in the final games of their respective high school careers with a state championship on the line.

Needless to say, they both delivered.

In this edition of “What They Are Saying”, we take a look at what’s being said on Twitter about the two Clemson signees following Saturday’s impressive performances:

Cade Klubnik rolls out, waits a bit, then finds a wide open Bryce Chambers for a 15-yard touchdown to put Westlake up.

Guess this is why he's a @ClemsonFB signee 🤯

He connects with junior WR Jaden Greathouse (@jadengreat1) for a 71-yard TD pass, his 3rd of this half

Cade Klubnik — in his last high school game before headed to Clemson — is 14-for-21 for 271 passing yards and four touchdowns.

Hey Disney, If y’all need a sports broadcaster in the movie, give me a call.

The Tigers and Eagles exchange punts, good coverage by Wade Woodaz on 3rd down.

These @JesuitTigers_FB are some ferocious hitters. @ClemsonFB signee @WadeWoodaz_ just blew up a Pine Forest run in the back for a loss #Clemson #ClemsonFootball #FHSAA

Clemson signee Wade Woodaz with a big hit and stuff on second down. Tigers D stops Pine Forest again on 3rd, but Eagles go for it on 4th and short from their own 34 and make it@JesuitTigers_FB @JesuitTampaFL #FHSAA @avillamarzo @PascoCountyFB #HSFB #StateChamps pic.twitter.com/1YQgzyKsHA 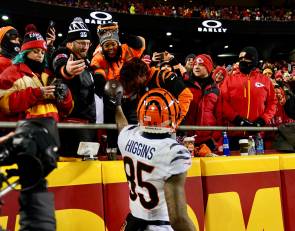 What They Are Saying: Higgins' highlight-reel TD in AFC title game