Following the Cheez-It Bowl last Wednesday, a few ACC analysts gave their takeaways from No. 19 Clemson’s 20-13 win over Iowa State.

On The Huddle on ACC Network, former Clemson All-ACC offensive lineman and current ACCN analyst Eric Mac Lain said one thing that stood out to him was the “lack of offensive explosion from the quarterback position.”

Following a month of bowl prep, Mac Lain expected to see more from D.J. Uiagalelei and his receivers against the Cyclones. The sophomore quarterback went 21-of-32 passing for 187 yards with an interception, while freshman Dacari Collins was Clemson’s leading receiver in the Cheez-It Bowl with 56 yards on six catches.

“I thought that this month of practice would do Clemson really well, and especially D.J. Uiagalelei, just to get back with those receivers,” Mac Lain said. “You had a couple of young guys that really hadn’t been there all year long. So, to have a full month in the bowl season where you have the Collins guys, with Beaux Collins and Dacari Collins, thought that we would see more chemistry, thought that we would see more things down the field, and he didn’t show it.”

Mac Lain also talked about the quarterback competition the Tigers will have this spring, with five-star signee Cade Klubnik set to enroll at Clemson this month and take part in spring practice.

“It might just be to the point of where you have a young freshman coming in this spring that wants to play, and it’s going to be a quarterback competition from day one,” Mac Lain said.

“There’s no doubt about it,” he said. “And really, for me, as a quarterbacks coach my whole career, it was a painful game to watch, and it was on both sides. Three points, three points, missing field goals. Just guys couldn’t make enough plays and couldn’t finish drives. But as the game went on, quarterback play got a little bit better. But it’s absolutely going to be a competition at Clemson.”

ACCN analyst E.J. Manuel, FSU’s starting quarterback from 2009-12 and a former first-round NFL Draft pick of the Buffalo Bills, believes this will be a big offseason for not only Uiagalelei — but also for head coach Dabo Swinney.

“Like, what decision do you make now because DJ, based off how he played in that freshman year, it’s still the biggest question mark for me is how do you go from playing that well your freshman year to now your sophomore year, you’re just not the same guy,” Manuel said. “I just feel like that’s going to be the toughest thing to try to figure out for Coach Swinney. I’m sure he’s scratching his head, too.” 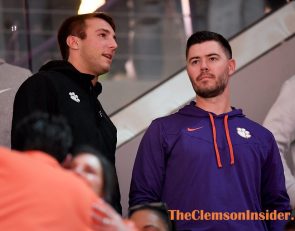 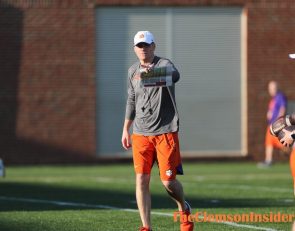 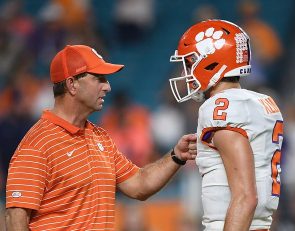