Clemson junior cornerback Andrew Booth Jr. is ranked No. 23 on McShay’s latest list, up seven spots from where Booth was ranked in McShay’s Dec. 6 version.

“I like Booth’s game a lot,” McShay wrote. “He does a nice job locating the ball while running in phase with receivers, and he is at his best in press coverage. Booth has a smooth back pedal and quick feet, but he does overreact at times to a receiver’s first move. The ball skills are top notch, as he had three interceptions and five passes broken up in 11 games this season.”

The Dacula, Ga., native nabbed team defensive player of the game honors after compiling two interceptions and a pass breakup at South Carolina on Nov. 27, joining Marion Reeves (1971) and Willie Underwood (1980) as the only Clemson players with multiple interceptions in a game in the rivalry’s history. 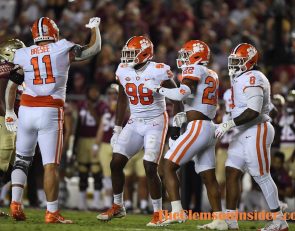 Where are Murphy, Bresee in McShay's updated draft rankings?