Clemson extended an offer Thursday to a talented defensive lineman from the Peach State that has been in touch with the Tigers for a while now.

“I was shocked and surprised about it, because I know that’s a real big offer,” Reed told The Clemson Insider.

The 6-foot-5, 260-pound junior first started hearing from Clemson last September and has stayed in contact with Hall since.

What message did Hall convey to Reed when he was informed of the offer?

“He told me he could see himself in me, and to keep working,” Reed said. 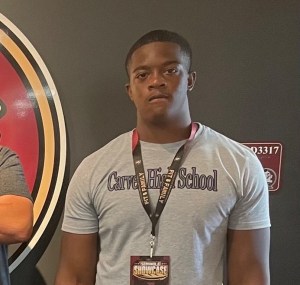 Reed has hit it off and developed a good rapport with Hall, a native of Valley, Ala. – which is located less than an hour from Reed’s hometown of Columbus, Ga.

“He came from the South, and we just have a lot of resemblance,” Reed said of his relationship with Hall.

Hall envisions Reed fitting in as a five-technique defensive end for the Tigers.

“[Hall likes] my work ethic, my aggression, my hands and my power and strength,” Reed said.

Reed, who made his first visit to Clemson last October for the Florida State game, is set to return to campus for the Tigers’ elite junior day Jan. 29.

Reed is also scheduled to visit Georgia on Jan. 15 and FSU on Jan. 22.

The Bulldogs and Seminoles have both offered him as well, along with schools such as Auburn, Tennessee, Miami, Georgia Tech and Michigan State.

Reed plans to release his top five schools on May 18, the date his mother sadly passed away.

The Tigers, he said, will be on his short list.

“The coaches and the relationship we have built over this time, and I can see myself there going forward,” he said of what makes Clemson one of his top schools.

Reed laid out what he is looking for in a school as he goes through the recruiting process and tries to find the right college fit for him.

“Somewhere I can pursue my dreams, have a great relationship with the coaches, and somewhere that feels like home,” he said.