The Clemson Insider has the latest on a new linebacker target for Clemson in the 2023 recruiting class.

TCI recently spoke with Fairfax (Va.) three-star Tony Rojas, who has recently emerged on Clemson’s radar and has been in contact with Wes Goodwin as of late.

Rojas touched on his interest from Clemson’s defensive coordinator/linebackers coach, his overall impression of Goodwin and if a visit might be on the table soon.

Goodwin wished Rojas a Happy New Year and introduced himself. He also asked Rojas if he was interested in Clemson, which he is. They talked about the other sports that he plays and Rojas sent over some of his film from this past season.

Obviously, the conversation was pretty surface level, but Rojas was already able to get a pretty good feel for Goodwin.

“He seemed like a genuine, real interesting guy,” he said. “I can’t wait to speak with him more.”

Rojas played defensive end during his junior season at Fairfax, but the 6-3, 200-pounds rising-senior plans on moving to linebacker for his final season of high school football.

For his efforts this past season, Rojas was named first-team All-Region at running back and defensive end and was also named second-team All-State at the aforementioned positions.

Rojas is a fast-moving, hard-hitting backer, who likes playing the game without thinking. According to Rojas, college coaches view him as an outside linebacker that can cover and a run-stopper with some speed.

Potentially playing linebacker at Clemson, considering the program’s history at position certainly resonates with Rojas and is an intriguing option for him going forward.

“Just seeing how Clemson players have gone onto play linebacker in the NFL after playing linebacker at Clemson is interesting,” he said.

Rojas said that he’s hoping he can make his first unofficial visit to Clemson sometime this spring.

He picked up an offer from Oklahoma on New Year’s Eve, to add to a list of offers that includes North Carolina, Penn State, Boston College, Liberty, ECU and the University of Virginia.

The three-star prospect currently ranks as the No. 34 linebacker and No. 9 overall prospect from the state of Virginia in the 2023 recruiting class. 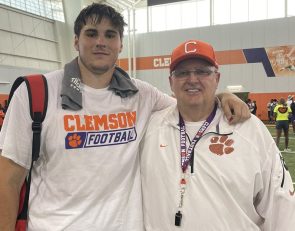