The latest on newly offered 2022 running back

The latest on newly offered 2022 running back

The Clemson Insider has the latest on a running back in the 2022 recruiting class, who received a highly-anticipated offer from Clemson on Thursday night.

We spoke with his head coach, Daniel Novakov, to get the latest on Paul’s recruitment after receiving the offer that he had been waiting for.

“I think Clemson is one of those premier programs,” Novakov told TCI.” Anytime you get an offer from a place like that, I think it kind of legitimizes you as a star amongst stars. I think it’s one of those top-notch programs that all kids aspire to be recruited by.”’

Novakov was able to connect with Clemson running backs coach C.J. Spiller, who told Paul’s head coach that they were going to be offering the talented back.

Obviously, Clemson didn’t need to do that, but Novakov appreciated the Tigers’ “old school” way of doing business.

Of course, he had a chance to speak with Paul after the offer came in.

“Oh man, I think he’s super excited,” Novakov said. “From talking to him and just from how his texts came across, it seems like he’s super, super excited.”

Since the start of the month of November, Paul has seen his recruitment take off. He’s earned offers from Cal, Michigan State, Auburn, Houston, Purdue, SMU, Washington State, TCU, Michigan and most recently the University of Notre Dame.

With National Signing Day less than a month out, Paul’s weighing his options as he looks to find his next home. It’s pretty clear that his coveted Clemson offer holds some weight. 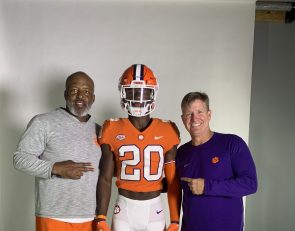