PJ Hall picked a good time to have one of his best performances of the season. So did some of his teammates.

Clemson had an uncharacteristically poor shooting night from deep and seemingly coughed up possession after possession on the road. But the Tigers did enough down the stretch Saturday to bounce back from their midweek loss at Virginia.

The Tigers also got 16 points from Al-Amir Dawes — the third-highest point total for the junior guard this season — while David Collins matched a season-high with 11 rebounds. Clemson also got eight points from Nick Honor and seven points off the bench from Chase Hunter, who played 11 of his 14 minutes in the second half after Collins got in foul trouble.

It all helped Clemson, the ACC’s top 3-point shooting team coming in, overcome a 30% clip from deep (3 of 10) and 16 turnovers, which N.C. State turned into 15 points with its extended defense.

But Hall was the beneficiary of that on the interior. The 6-foot-10, 240-pounder caught pass after pass close to the basket with a handful of his buckets coming on dunks. He had back-to-back flushes to put the Tigers up 53-49 with 7 minutes, 59 seconds left.

“We can get it to (Hall) at an angle where he can lay it in or dunk it,” Brownell said. “It’s hard to do that. The timing has to be perfect, and it’s never easy because you’re under duress and the other team is pressuring you. It’s not something you can do on a regular basis, but in a game like tonight, they pressure you so much (on the perimeter).

“We have different teams that play differently. It’s not easy to do, but today we were able to find a few times to get PJ some good looks.”

After N.C. State got within a basket a couple of different times, the Tigers gave themselves some breathing room with a 7-0 spurt capped by a jumper from Hunter with 3:31 left for a 62-53 lead, matching their largest advantage of the game. Hunter made all three of his shots, including his lone 3-pointer, to match his second-highest point output of the season.

Clemson then used the charity stripe to ice its fifth win in six games. The Tigers made six of their final seven free throws, all in the final minute, and shot 84.6% from the free-throw line (11 of 13) for the game.

The Tigers also regained their defensive form after allowing Virginia to shoot better than 53% from the field Tuesday. Clemson held the Wolfpack to just 31.7% shooting, including just 10 baskets within the 3-point line.

Dereon Seabron, the ACC’s third-leading scorer, scored a game-high 27 points for N.C. State, which has lost six of its last seven games.

“Just more communication with each other and more just being locked in and focused on the details whether it’s to switch or to get over a screen,” Dawes said of the defensive improvement. “Just the details of it.”

Said Brownell, “That’s about as good as you can do. Seabron’s a heck of a talent. Man, is he good.”

While the offense was choppy early, Clemson eventually got it going to lead 30-28 at the half, though turnovers kept the Tigers from extending their lead. Clemson missed its first six shots of the game and went more than 4 minutes without scoring later in the opening 20 minutes before a 3-pointer from Dawes – Clemson’s first of the game – ended the drought with 9:02 left in the first half.

It was the first of six consecutive makes for the Tigers, who ripped off a 10-0 run to take a 23-16 lead with 5:10 remaining before halftime. Dawes had 10 of his points in the opening half while Hall contributed eight first-half points.

But the teams combined to turn it over 17 times before halftime with Clemson committing eight of them. That contributed to the Tigers scoring just three points off the nine they forced from the Wolfpack, who ended the first half on an 8-2 spurt capped by Cam Hayes’ 3 just before the buzzer.

Ultimately, though, the combination of Hall’s interior dominance and other contributions on both ends of the floor proved to be enough for the Tigers, whose two league wins have come away from home. They have another road trip awaiting Wednesday at Notre Dame.

“It’s really good for the morale for your team,” Brownell said. “You get on the road sometimes, and if you have a good team that can stay focused and you’re playing with each other and for each other, sometimes there’s less distractions. That can be really good, and I thought that’s been the case.” 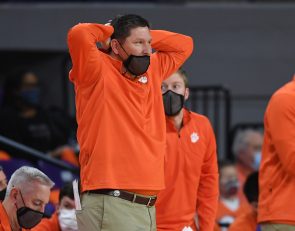