What They Are Saying: Renfrow, Williams star in Sunday Night Football thriller

What They Are Saying: Renfrow, Williams star in Sunday Night Football thriller

A couple of former Clemson wide receivers shined in Sunday night’s NFL game between the Las Vegas Raiders and the Los Angeles Chargers.

Hunter Renfrow hauled in two touchdown passes to help the Raiders defeat the Chargers 35-32 in an overtime thriller, while Mike Williams had nine catches for 119 yards and a touchdown — a 12-yard score as time expired in regulation to send the game to overtime.

With the win, Renfrow and the Raiders earned their first playoff berth since 2016 and will play at Cincinnati in the first round of the AFC playoffs. The Chargers, meanwhile, saw their season come to an end with the loss.

Check out what they are saying about the performances of Renfrow and Williams in Sunday night’s game:

That route by Renfrow was FILTHY

Hunter Renfrow’s ability to pack an extra juke into a route, put a defender on skates, and keep the play on time will never not impress me

5 years ago today ⁦@renfrowhunter⁩ and ⁦@darealmike_dub⁩ made big time plays to win the Natty. 5 years later they still making plays on the big stage #proudcoach pic.twitter.com/OBJKX7RoS0

It just seems fitting that, today of all days, Renfrow and Williams are out here basically making every single one of the biggest plays

89 straight games with a catch for Renfrow, last 43 at Clemson and first 46 in NFL.

First time in NFL career Hunter Renfrow has scored 2 touchdowns. Fourth time with 2 TDs in a game college or pro. Two of the 4 have come on Jan. 9 this game and Natty vs Alabama five years ago today. Other 2 games in 2015 season Natty vs Alabama and South Carolina 2017

Five years ago tonight Clemson beat Alabama 35-31 on TD pass from Watson to Renfrow with one second left. On that winning drive Mike Williams drew interference call to set up last play. Tonight they have caught combined 11 passes, three for TD.

The numbers are just spooky. On the five year anniversary of #4 Watson to #13 Renfrow to beat Alabama. Renfrow ends up with four catches for 13 yards. He had 2 TDs in the Natty five years and two touchdowns tonight. 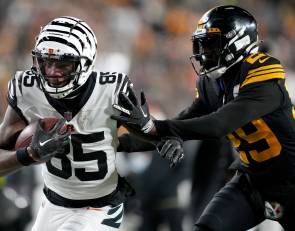 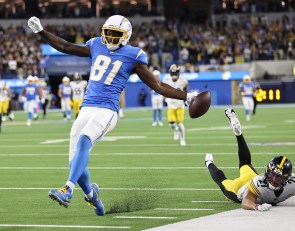