As Clemson continues to search for the answer to its most pressing positional question, head coach Dabo Swinney indicated another viable candidate has entered the mix as Will Spiers’ potential successor.

The punters have received mixed reviews through the first week of preseason camp. Swinney was critical of the first day of competition at the position, calling the Tigers’ first practice perhaps “the worst punt drill I’ve ever seen in my life.” But Swinney said the group, led by Aidan Swanson and B.T. Potter, bounced back with solid performances the next two days.

Swinney had his highest praise for the group’s performance following the Tigers’ fifth practice Wednesday. True freshman Jack Smith was the standout, giving Swinney and special-teams coach Mike Reed something to think about.

“Today was incredible,” Swinney said. “We went from no contest to now we’ve got a three-horse race. And I love it,” Swinney said. “Jack Smith won the day today. He was just bombing it. He looked like the guy we brought in here that won the scholarship.”

Swinney said Swanson and Potter have also been more consistent since that opening practice.

“Aidan has been awesome,” Swinney said. “He’s had two good day in a row, and B.T. is just steady. So I’m pretty encouraged with what I’ve seen.”

It’s a positive development at the position that Swinney has the most concern about with a little more than three weeks left before the Tigers’ Labor Day opener against Georgia Tech. 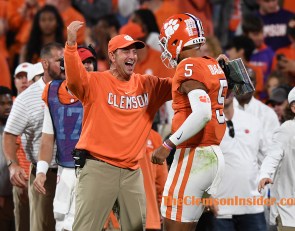