After capturing six straight ACC Championships from 2015-20, Clemson saw that streak get snapped in 2021 when Coastal Division champion Pittsburgh claimed the conference crown with a victory over Atlantic Division winner Wake Forest.

Heading into 2022, many expect Dabo Swinney’s Tigers to get back to the ACC Championship Game, win the conference once again and return to the College Football Playoff after missing the playoff last year for only the second time since the playoff began in 2014.

During ACC Network’s ACC Football Road Trip show at Clemson that aired Wednesday, former Georgia and Miami head coach and current ACCN analyst Mark Richt was asked about his expectations for the Tigers going into the season.

“You see the high-percentage number, and I get it,” Richt said. “Now, there are two other teams that have played well lately – Wake Forest, obviously, NC State. NC State beat them a year ago… So, it’s not going to be cut and dry with everybody across the board… I’ve been saying it all along – if the QB position plays well, it’s a wrap.”

Former Clemson and All-ACC offensive lineman Eric Mac Lain, now an ACCN analyst, also gave his expectations for the Tigers, who started last season 4-3 before reeling off six straight wins to finish 10-3 and reach at least 10 wins for the 11th consecutive campaign.

“I think it really is kind of the return of the king, if you will, this season with Clemson being back,” Mac Lain said. “But it’s certainly going to be a tall task. You think right here, on this field (at Death Valley), October 1st – what a big day that’s going to be as NC State comes to town, and we know how much they want to get that illustrious ACC title.

“But it’s going to have to go through these guys (the Tigers), and they’re going to be back. That defense is going to be tremendous. As coach has said many, many times, this whole thing is centered around the quarterback position.”

Swinney has reiterated that junior D.J. Uiagalelei is Clemson’s starting quarterback heading into the Labor Day opener against Georgia Tech. While offensive coordinator/quarterbacks coach Brandon Streeter acknowledged this week that “there is definite competition” between Uiagalelei and freshman Cade Klubnik, Streeter said Uiagalelei is “the guy right now.”

Kickoff for the Tigers’ season opener against the Yellow Jackets at Mercedes-Benz Stadium in Atlanta is set for Monday, Sept. 5 at 8 p.m. on ESPN. 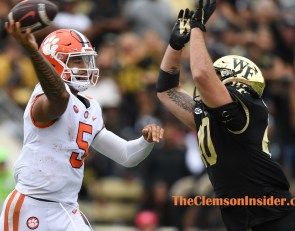