No. 4 Clemson dispatched of Furman this afternoon at Memorial Stadium to improve its record to 2-0 on the young season. Here are four sequences that went a long way in determining the outcome, a turning point and a telling stat from the Tigers’ 35-12 win.

Furman continued its rather easy first half moving the ball on Clemson’s defense when Huff connected with Ryan Miller for a 25-yard touchdown to cut the Tigers’ lead to two scores late in the first half. But after a three-and-out with freshman Cade Klubnik at the controls of the offense the previous possession, Clemson reinserted D.J. Uiagalelei at quarterback and took back the momentum. Uiagalelei led the Tigers on their fourth touchdown drive of the opening half, which included a third-down conversion to Brannon Spector and a long completion to Antonio Williams on a broken play. Kobe Pace finished it with a 1-yard scoring plunge to give Clemson a 28-9 halftime lead, the start of 14 straight points scored by the Tigers to quell any thoughts of an upset despite some late miscues by the home team.

That was Uiagalelei’s completion percentage, making for the highest completion rate of his career at Clemson when playing extended snaps. The Tigers’ starter set the tone for his strong day with six straight completions and went 15 of 18 on the first four drives he led, all of which ended in touchdowns. Two of his completions went for touchdowns, which included a well-placed ball over the shoulder of Collins near the front corner of the end zone. It continued a strong start to the season in the accuracy department for Uiagalelei, who has completed 67.7% of his passes through two games – 12 percentage points higher than last season. 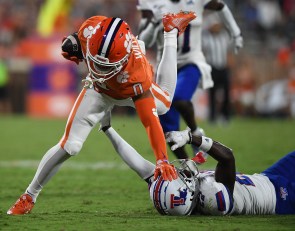