Clemson overcame a sluggish start to pull away from Louisiana Tech for its latest win late Saturday night at Memorial Stadium. The victory moved the Tigers to 3-0 with their first ACC road test looming against Wake Forest next weekend.

Clemson has been nearly unbeatable when rushing for at least 200 yards during Dabo Swinney’s tenure. Until Saturday, though, the Tigers had not been able to add to their impressive record when pulling off that feat this season.

Clemson’s ground game put it all together against Tech as the Tigers rushed for a season-high 280 yards, improving their record under Swinney to 73-1 when reaching the 200-yard mark. At the center of it was Will Shipley once Clemson started feeding him the ball with more regularity (more on that later).

With Tech opting to play man defense for much of the night, Clemson’s offensive line blocked things up well in the box and seemed to get more consistent push, creating plenty of running lanes for Shipley and company. Shipley rushed for a career-high 139 yards and two scores on just 12 carries.

Clemson kept its perfect red-zone scoring percentage intact by coming away with points on all six of their trips inside the Bulldogs’ 20-yard line, continuing a strong start to the season in terms of Clemson’s execution near the goal line. The Tigers found the end zone on each of their final three red-zone trips after having to settle for field goals on two of their first three. Clemson is one of just two teams nationally (Michigan) that’s had at least 19 red-zone possessions and scored on all of them.

And the offense got more help in the turnover department from the defense, which had four more takeaways. Clemson scored 21 points off those turnovers, which helped the Tigers pull away in the second half. Clemson, which also had its first turnover-free game of the season on offense, sits at plus-3 in turnover margin through three games.

The Tigers also blocked a field-goal attempt in the first half, running their tally to three blocked kicks on the season.

As explosive as Clemson’s offense was at times, the Tigers are still trying to put together a four-quarter game in the consistency department.

Clemson started fast the previous week against Furman but ended slow. It was the opposite Saturday when the Tigers mustered just 13 first-half points against what’s been one of the worst defenses in Conference USA this season. After putting together a 79-touchdown drive midway through the first quarter, Clemson punted on three of its final four possessions of the first half, accumulating just 26 yards on those drives.

Uiagalelei wasn’t as precise with his accuracy as he had been the week before, overthrowing a couple of shot plays early before finding a groove in the second half. He didn’t always get consistent help from his receivers. Joseph Ngata’s diving catch to set up the Tigers’ first touchdown followed by a drop on a well-placed ball later in the first half was a prime example.

Defensively, Clemson’s back seven continues to struggle in coverage. A week earlier, it was Furman’s quick passing game and screens that gave the Tigers fits. Tech’s Air-Raid offense went vertical more often than not, either burning the Tigers’ man coverage or finding soft spots in a zone. Tech quarterback Parker McNeil needed just 23 completions to throw for 311 yards, an average of nearly 14 yards per completion.

Clemson’s defense wasn’t all that disruptive up front with just one sack on more than 40 pass attempts and seven tackles for loss, though the Tigers were playing without a handful of significant contributors on that side of the ball.

While the offense struggled to find its overall footing early, Shipley ripped off 20 yards on his first run. He later scored on a 2-yard plunge. Yet despite averaging 7 yards on his five carries in the first quarter, Shipley didn’t get another carry for the rest of the first half.

In a perplexing move, Clemson went away from Shipley and the running game for most of the second quarter despite averaging 6.6 yards a carry as a team through the first 15 minutes, a decision offensive coordinator Brandon Streeter acknowledged afterward was made too quickly.

The Tigers opted to throw a bunch of 50-50 balls to receivers instead trying to take advantage of those one-on-one matchups on the perimeter, but Uiagalelei completed just 5 of 12 passes during a second quarter that saw Clemson muster just 79 total yards. When Streeter went back to the running game with more regularity in the second half – Clemson ran it 25 times in the final two quarters to just 14 times in the first half – the Tigers averaged 7.7 yards on the ground.

Swinney said he’s not worried about any of those injuries long term. But for a team that was ravaged by injuries early and often a season ago, it’s a situation worth monitoring. 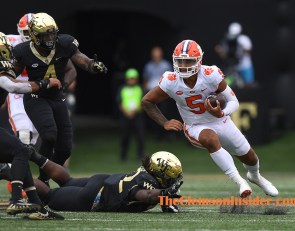