Clemson’s defense is capable of getting back to being the dominant force it was for much of last season.

At least that’s the opinion of one of its veterans.

Senior defensive tackle Tyler Davis said he has “a lot of faith” in the group regaining its old form. Despite having a group with more than half of its starters back after allowing the second-fewest points in the country last season, it’s been a struggle for first-year coordinator Wesley Goodwin’s unit at times, particularly through the air. Clemson’s pass defense ranks 104th nationally (267.8 yards per game).

Part of the issue is the defense has yet to play a game at full strength. Defensive end Xavier Thomas (foot) has yet to play this season, and Davis himself missed two games with an undisclosed injury before returning to the lineup against Wake Forest last week. Clemson is hoping to have defensive backs Sheridan Jones (stinger), Andrew Mukuba (elbow) and Malcolm Greene (undisclosed) back for Saturday’s game against N.C. State, but Clemson coach Dabo Swinney didn’t make any promises.

Injuries or not, Davis said the defense needs to play with more of an edge.

“I think we need to just have a more killer instinct,” Davis said. “Just trying to really get after people. That’s what we have to do. Focus a little bit more on the details.”

After giving up 45 points to the Demon Deacons in a double-overtime win, Clemson dropped to 53rd nationally in scoring defense and 48th in total defense. The Tigers’ front four, believed to be one of college football’s best coming into the season, has helped keep teams from running the ball much (78.5 rushing yards allowed per game), but it’s been a mixed bag when it comes to generating pressure up front.

The Tigers are averaging eight tackles for loss but have just eight sacks through four games, tied for second-fewest in the ACC.

“I think it’s something that you dig down deep and find,” Davis said. “At the end of the day, you’ve got to want it more than the other guy.”

Davis knows things won’t get any easier this week with N.C. State’s offense paying a visit to Memorial Stadium on Saturday. He praised all of the Wolfpack’s position groups on that side of the ball, including veteran quarterback Devin Leary, who’s completing 64% of his passes with nine touchdown passes against just two interceptions.

But Davis is confident in the pieces Clemson’s defense has, too. Even if the Tigers have left a lot to be desired through the season’s first month.

“Everything’s there,” Davis said. “We’ve just got to put it together.” 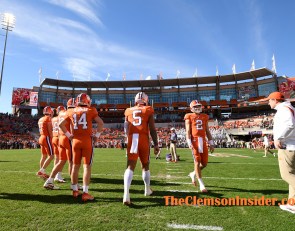