Heather Dinich, who covers the College Football Playoff for ESPN, recently wrote an article breaking down playoff contenders into tiers heading into October.

Dinich broke down the Tigers, highlighting their best September win (Saturday’s 51-45, double-overtime victory at Wake Forest) and their toughest test ahead (the Nov. 5 game at Notre Dame), as well as what the CFP selection committee will consider with Clemson.

Here’s an excerpt of what Dinich wrote regarding that:

Undefeated Clemson is in, but one loss opens the door for debate, even with an ACC title. As thrilling as Clemson’s win was Saturday, its secondary was outplayed repeatedly. How would the unit match up against Ohio State’s wide receivers? Clemson has a fearsome defensive front, and it’s clear quarterback DJ Uiagalelei is playing with more confidence and in turn more accuracy, but the Tigers still have to face NC State and travel to Florida State, two of the more difficult Atlantic Division games. If two SEC teams finish in the top four again, and the Big Ten champion earns a spot, the ACC champion will have to win a debate against the Big 12 and Pac-12 champions (or maybe a second Big Ten team). Would one-loss Clemson usurp one-loss USC or Oklahoma? It’s certainly possible, especially if the Tigers look the part.

Michigan and Southern Cal are the other two teams that Dinich has in Tier 2, while she has Georgia, Alabama and Ohio State in Tier 1 — “the clear front-runners.” 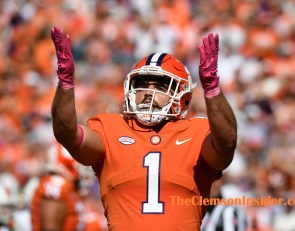