Coming off a nail-biter win against Wake Forest this past Saturday, Clemson quarterback DJ Uiagalelei spoke with the media on Monday just days before the team’s top-10 matchup in Death Valley against N.C. State.

Uiagalelei threw for a season-high 371 yards with 5 touchdowns in the 51-45 double overtime win against Wake Forest.

“It was a crazy game… it was a dog fight all the way until the end and I am glad we came out with a win,” said Uiagalelei “It just showed how much heart we have, we battled until the very end… It was a fun game to be a part of.”

Following last year’s double overtime 27-21 loss to the Wolfpack that knocked the Tigers out of College Football Playoff contention, Uiagalelei is eager to be facing them again, but this time at home under the lights in Death Valley.

“It’s going to be great,” he said. “The stadium is going to be packed…N.C. State is a great football team, and I am excited to get to work.”

Even among all the excitement for the game this Saturday night, Uiagaliei has not forgotten how it feels to lose. He still thinks about that fourth-down incomplete pass that helped the Pack seal the win and spoke about how he does not want a repeat of last year.

“I remember losing the game, I remember how I felt. I felt like there were a lot of plays that I left out there that I wish I had back” said Uiagalelei on Monday “It definitely sucked losing, I hate losing but coming in this year I am excited to be able to play against them. It’s going to be a great game, they are a great team, and I am looking forward to being able to play them here at home.”

Uiagalelei has grown a lot since the loss to N.C. State last year, and seems to continue to grow each game. The offense finally seems to be getting into a routine with each other, and Uiagalelei believes this is just the beginning for him and the offense this season.

“I think there are always more things I have to do, each and every week my biggest thing is just to learn and get better and be able to grow from last week. I did a lot of stuff well last week, but all of that doesn’t carry over because it’s a new week, and I have to be able to go out there and produce again and do even better,” Uiagalelei said. “And as an offense, we keep getting better each and every game, I think that the sky’s the limit for what we can do on offense, and I feel like last week a lot of stuff started coming together” 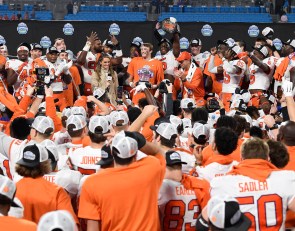 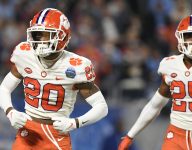 More than two months after the game he’d rather forget, Nate Wiggins had one he’ll remember for a while. While freshman quarterback Cade Klubnik stole the show for the offense in a nearly flawless relief (…)