After the game, which the 49ers won 38-10, Ward took a shot at Hopkins while calling him “steroid boy” — of course, a slighting reference to the six-game suspension Hopkins served to start this season for violating the NFL’s performance-enhancing drugs policy.

“D-Hop, he think he a tough guy,” Ward said, via KNBR.com. “He think he still one of the best receivers in the league and he really not.

“He was getting locked up. He was doing some dirty things. He tried to clip me, he grabbed me by the throat. He grabbed my facemask on one play, so I don’t respect his game. That’s steroid boy.”

Hopkins was matched up against Ward throughout Monday’s game played at Estadio Azteca, where Hopkins — despite “getting locked up” as Ward suggested — impressively hauled in nine of his 12 targets for 91 yards, catching passes from Cardinals backup quarterback Colt McCoy who was filling in for injured starter Kyler Murray.

In five games this season since returning from his suspension, Hopkins has been highly productive, amassing 45 catches for 487 yards and two touchdowns.

Ward’s comments on Hopkins figure to spice things up when the Cardinals and 49ers meet again in San Francisco on Jan. 8 to finish out the regular season.

I guess you’ve gotta make some kind of excuse after you get put in the spin cycle all game😂😂😂😂 pic.twitter.com/a8i0SK6CuB 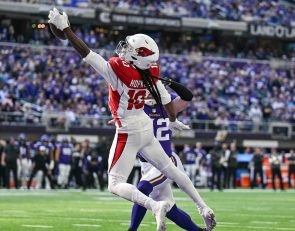