Clemson went into Saturday’s ACC Championship Game against North Carolina with a plan at quarterback – DJ Uiagalelei would start the game, and Cade Klubnik would come in on the Tigers’ third series no matter what transpired to that point.

Indeed, Uiagalelei started the game, and Klubnik replaced Uiagalelei on Clemson’s third possession. But after the Tigers went three-and-out on each of their first two possessions with Uiagalelei at the helm, missing some easy throws, Klubnik entered and Clemson scored touchdowns on each of his first three drives.

The ninth-ranked Tigers rolled the rest of the way en route to a 39-10 win over the No. 23 Tar Heels, claiming their seventh ACC title in the last eight seasons.

“DJ did not play well the first two series and didn’t know what he was going to do, and then he came in and really played well,” Swinney said of Klubnik after the game. “You saw what Cade could do tonight. Man, he’s worked his butt off all year to get ready.

“Again, I’m proud of DJ and the leader he is and just the man of character that he is, and the reality is we would not have won the Atlantic and been here tonight without him and wouldn’t have won the ACC Championship without Klubnik.”

Uiagalelei completed 2 of 5 passes for 10 yards across his two drives before Klubnik took over. The Tigers’ talented true freshman finished the game 20 of 24 passing for 279 yards and a touchdown toss, while rushing for a team-high 30 yards and another score on seven carries.

Klubnik’s performance earned him the game’s Most Valuable Player honor.

“We already knew he was going in, and then Cade went in and played well, and it happened. That’s how it goes,” Swinney said.

“But again, we don’t win the Atlantic without DJ, and there’s no doubt about that. Appreciate who he is. He’s one of the most respected young men that’s come through this program. His teammates love him. You know, things have to happen the way they’re supposed to happen, and tonight that’s the way it went.”

Clemson clinched its first Orange Bowl bid since 2015 with the win over North Carolina, and Swinney said Klubnik will “definitely” start in the Orange Bowl.

“It was a great night, and again, a glimpse of our future and what it looks like at Clemson,” Swinney said of the former five-star prospect from Texas. “I’m really happy for him, and yeah, definitely has earned his opportunity to go start.

“We’ve got a few weeks here to get ready to play for whoever we play in the Orange Bowl, and excited to see him continue to build on it, and again, have a great finish and build some momentum going into next year.”

Swinney was asked how Uiagalelei took the news when he was told that Klubnik would be coming in for the third series of the ACC title game.

“We hoped that he’d play well, but he didn’t have a great series, especially the first series there. But we stuck with the plan, and then the rest is history. You’ve got to give credit to Cade for that. He kind of came in and took it, and it happened.”

With Klubnik set to start in the Orange Bowl, Swinney addressed what Uiagalelei’s future looks like.

“He’s a guy that (will) always have a special place in my heart because nobody has ever worked harder, nobody has ever been more respected in this program. These guys love DJ, and I do, too.” 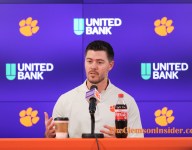