Why college football should take notice?

Why college football should take notice?

The events of the past two weeks have brought the Clemson football team closer together.

Clemson quarterback Trevor Lawrence said the Tigers are already closer as a football team after everything that went down with its football coach and the program being attacked by the media and other fan bases.

“I think [this changed us] for the good,” Lawrence said when asked how the events of the last two weeks at Clemson, including the Clemson Community Peaceful Demonstration this past Saturday, has brought the team closer together.

In the last two weeks, the national media has accused Clemson head coach Dabo Swinney of not taking more of a stance in a Zoom conference call following the death of George Floyd on May 25 and the movement to stop racial injustice and police brutality. Then the news came out on June 2 from a former player that accused a Clemson assistant of saying a racial slur in practice that offended the players who heard it. 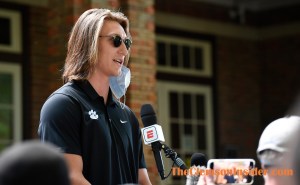 Clemson quarterback Trevor Lawrence spoke to the media prior to the Community Peaceful Demonstration on the campus of Clemson University Saturday, June 13, 2020. (photos by Bart Boatwright/The Clemson Insider)

Later that day, news broke tight ends coach Danny Pearman was the assistant who uttered the word while attempting to make a point and teach a lesson on why not to use the word after he heard one of his former players, former tight end D.J. Greenlee, say it to one of his teammates. Pearman later released a statement apologizing for using the word and explaining his role in the incident.

Swinney was then falsely accused of saying the racial slur himself on June 7 by a former player, which has since been proven to be a false accusation. On that same day, a picture of Swinney posing with college football fans was taken and used to troll the national media because Swinney was wearing a T-shirt given to him two years ago by the National Football Foundation that said “Football Matters.”

National media writers instantly accused Swinney, who took the picture at private pool in a gated community, of being incentive to the “Black Lives Matter” movement. Swinney’s current and former players quickly came to their head coaches’ aid.

On June 9, Swinney explained the T-shirt incident, as well as all the other things and character attacks on him and the Clemson program. However, the national media was still not satisfied with Swinney’s stance on the Black Lives Matter movement.

On Saturday, the Clemson Football team came together with the Clemson Community for a peaceful protest on Bowman Field in front of Clemson University. Swinney, along with his four players that organized the event to speak out against racial injustice and police brutality, spoke to the estimated crowd of 3,000 people.

However, on Monday, Swinney was again attacked by national media members—writers and television personalities—for being there or waiting too long to say the right things.

But as Lawrence put it, everything that has went on the last two weeks, especially with the conversations he has been able to have with his teammates, has brought the Tigers, as a team, closer together.

And when it is time to playing football in the fall, it will likely not be good for those who have to play Clemson.