Even before they arrive in Clemson next month, some Tigers already checking in on their future teammates 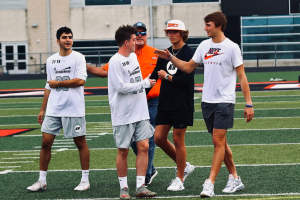 Klubnik, an Austin native himself, was there to support his Westlake (Texas) teammate, Mark Sayegh, in addition to Gunn.

Unfortunately, Gunn’s senior campaign at Pinellas Park came to an early end when he tore the ACL in his right (kicking) leg earlier this season, but the good news is he is ahead of schedule in his rehab and expects to be fully recovered this spring.

Both Klubnik and Gunn will be enrolling early next month.

Big shout out to Cade Klubnik for chilling with us at Day 2 of the 2021 National Showcase!

He was around to check out the action & support his Westlake HS kicker teammate Mark Sayegh and future kicker teammate Robert Gunn III, the 2020 National Showcase kickoff & punt champion… pic.twitter.com/qZZZz3cHLw