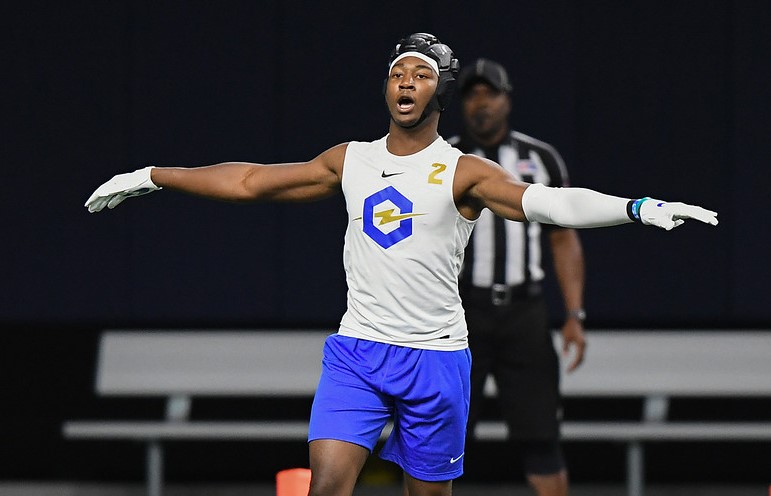 High school stats/accolades: Played in the All-American Bowl on January 4, 2020 in San Antonio, Texas … MaxPreps Preseason First-Team All-American in 2019 … was a multi-dimensional weapon for Trinity Christian Academy … posted 101 tackles in 37 career games, adding four interceptions, 30 passes defensed, two caused fumbles and a blocked kick … averaged 8 yards per carry on offense … also played quarterback and threw for three touchdown passes in a game … also returned kicks … recorded 26 tackles, two tackles for loss, an interception and 11 passes defensed as a senior … had seven tackles and five passes broken up in season opener against Godby … played some quarterback as a senior and completed 11-of-19 passes for 172 yards and three touchdowns against Pahokee … recorded 16 carries for 126 yards and a touchdown against Booker T. Washington … averaged 8.3 yards per rush for the season on 29 carries and also added four receptions for 60 yards … in 2018, posted 48 tackles,13 passes broken up and an interception … had an 86-yard interception return for a score in one game and 95-yard kickoff return for a score in another … first-team All-USA Florida selection by USA Today and first-team All-First Coast selection by the Florida Times-Union … first-team MaxPreps Junior All-American honoree …  third-team 5A all-state … had 27 tackles as a sophomore to go with a pair of interceptions

Strengths: Davis is a special athlete that shined on defense, offense and special teams for Trinity Christian Academy. He has nice size for a corner at 6-foot-1 to go with plenty of length, speed and athleticism. Davis uses those traits to excel in coverage and has great instincts and attacks the ball when it is in the air. He possesses the playmaking ability to go up and get the ball (36-inch vertical jump) and then once the ball is in his hands, he is a threat to take it to the house for a pick-six. Davis is also physical enough to play press coverage and does not mind helping in run support when he needs to. He gives a lot of effort and has no shortage of competitive fire. Davis has a lot of tools for the Tigers to work with, and he has tremendous upside.

How he fits in: With A.J. Terrell declaring for the 2020 NFL Draft, the starting cornerback spot opposite Derion Kendrick is up for grabs. Sophomore Mario Goodrich and freshman Andrew Booth were listed as Terrell’s backups on Clemson’s final depth chart of the 2019 season entering the national championship game, while freshman Sheridan Jones and redshirt sophomore LeAnthony Williams slotted in behind Kendrick. In addition to Davis, the Tigers signed cornerback Malcolm Greene in the 2020 class. While Greene is expected to enroll in June, Davis has already arrived on campus as an early enrollee and will be able to participate in spring practice. Look for Davis to compete for early playing time as a true freshman in 2020 and try to crack the cornerback rotation right away. He certainly has the potential to be an impact starter for the Tigers in the future.

Coach speak: Clemson head coach Dabo Swinney on Davis — “Fred is … you think about A.J. — long — he is a long corner. Great speed, great length, great athleticism, excellent ball skills. Played quarterback for a long time in his career growing up and just has a knack for the ball, been well coached and I think going to be just a great, great player for Mike (Reed).”

Clemson cornerbacks coach Mike Reed on Davis — “A young man who comes very skillful. Loves to compete, loves the game of football. Coming from a great family. It makes it easy when you deal with less drama, makes my job a lot easier. You don’t have a kid that’s going all over the place visiting. He committed, it was locked in. I’m truly blessed to have a young man like him to come here and play for us and make us better.”

GREENSBORO, N.C. – The Atlantic Coast Conference and its television partners announced the following football game times and networks for the week of Oct. 31. Saturday, Oct. 31 Boston College at (…)

Sometimes playing in front of friends and family members can be added pressure for a player. But that is not the case for Clemson quarterback Trevor Lawrence. In the two times Lawrence has made his (…)

When a team puts up 73 points on one of its rivals, it is easy for its fans and the media to get excited about its offense. However, the least talked about part of Clemson’s 73-7 victory over Georgia Tech (…)

With Uiagalelei, Phommachanh out, walk-on steps up